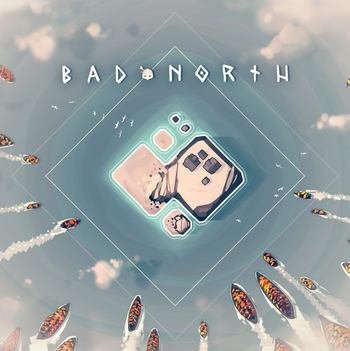 A typical island, beset by Viking boats from all directions.
Once upon a time, there was a chain of small islands ruled by a king, until one day, the Viking invaders came and slew him. His heir prepares to repel the invasion in spite of badly outnumbered, needing not just a single victory, but a series of them against an unrelenting foe that'll gladly take over whatever you are not able to defend with your limited troops.
Advertisement:

That is the basic idea of Bad North, a minimalist Roguelike / Real-Time Strategy hybrid that was developed in Unity by Plausible Concept, and released for Nintendo Switch on August 20th, 2018. It was then ported to PS4, Xbox One and for PC through Steam on August 28th, 2018. Bad North: Jotunn Edition followed on October 15th, 2019; that version was also ported to iOS and Android on the same day.

And just in case, Jotunn Edition of this game has nothing to do with 2015's Boss Game Jotun.