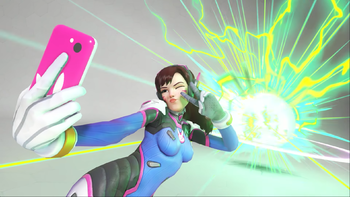 One mech is not worth missing today's social media post!
Moments pages are Spoilers Off. You Have Been Warned.
Advertisement:
open/close all folders
Animations

Are You With Us?

Soldier: Everyone still alive?
Gunslinger: Seems so. That or the afterlife is a big disappointment.

Archives (For the brawls that come with this event, see the respective categories below)