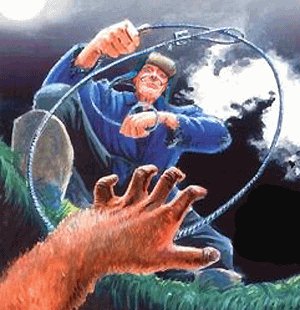 Jakub Wędrowycz is the protagonist of comedic short stories by the Polish author Andrzej Pilipiuk, most of them Urban Fantasy set in Poland in the late 80's and 90's, collected into several books.

Jakub is, on the surface, your typical bum. He's an old man (at least an octogenarian) who dropped out from school after three years of elementary education and who lives alone in a dirty house on the outskirts of the village of Wojsławice; he consumes gigantic amounts of alcohol, makes just as vast amounts of moonshine, hunts homeless animals for food and barely bathes or changes his clothes.

Oh, he also happens to be a master exorcist, a powerful psychic and a skilled mage.

His adventures include both dealing with countless aliens and monsters (including ghosts, demons, an undead Vladimir Lenin, neanderthals and psychic trees) and generic Slice of Life (but what a life it is!) misadventures induced by his scatter-brained tendencies. And lots of illicit activities, moonshine-brewing being just one of the many.

Stories about Jakub Wędrowycz exhibit examples of the following tropes: