Characters / Batman The Brave And The Bold Antagonists

Alfonso Vincenzo Giuseppe Face is a ruthless gangster with the face of a young child, but a manly voice of Edward G. Robinson. Though when he is defeated he whines like a baby, and he also wears diapers.

A former champion of the wizard Shazam, five thousand years ago. Black Adam turned against the wizard, and was banished into the depths of space, until Doctor Sivana managed to summon him back to Earth.

Black Manta is a criminal from the surface world who frequently clashes with AQUAMAN.

While he simply appears to be a scrawny little punk, whenever Mark Desmond ingests the right chemicals, he becomes the super-strong Blockbuster, though his intelligence takes a hit when he does. Desmond's crimes are fuelled by the need for more funds. Chemicals don't come cheap, after all.

A genius with his mind stuck in a robotic body, the Brain uses his intellect to get back at the world by committing heinous crimes.

Batman has never met another villain quite like the elusive and illustrious Catwoman, and not even a complex death trap can keep the two from friendly flirting.

Voiced by Greg Ellis
A criminal who has based himself on a 17th century swordsman.
The Cheetah

The first villain to appear in The Brave and the Bold, Clock King has simple goals in life: assemble a clock-themed group of henchmen in a clock-themed secret lair, construct elaborate clock-themed traps and/or weapons, and use them to rob banks and/or kill Batman.

An ex-painter who leads a double life as a master thief, he is blinded during a battle with Batman and Robin. While in prison, he volunteers for an experimental procedure that would restore his vision. There is a side-effect, however: Even though he can see, he can only see in blinding, disorienting colors. Crazy-Quilt's wears a helmet that allows him to hypnotize his victims using flashing lights of various colors. It can also project lethal laser beams, blinding lights, and functions as artificial eyes since his own eyes no longer function; the lenses feed their input signal straight into his brain.

An alien despot obsessed with conquering the universe, Creature King first appears in the episode "Bold Beginnings!" during the teaser with a mind control helmet which he uses on several astrodactyls and moon apes. Batman later knocks him out, making the mind control helmet fall off his head in the process.

The greatest criminals of another Earth, the Crime Society assist Owlman in his villainous deeds. 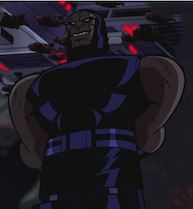 Darkseid is the ruler of the planet Apokolips and the most feared being in the universe. He successfully conquered the Earth defeating both Batman and his new Justice League, but is forced back to Apokolips from an unexpected source.

Voiced by Ron Perlman
A man with a very literal split personality. Simon Ecks commits crimes in order to drain enough energy that he can give his more brutish other side a physical body of his own.
Doctor Sivana

A mad scientist who plagues Fawcett City with his demented schemes, with assistance from his children, requiring the intervention of Captain Marvel.

An orphan empowered with powers of Order and Chaos, he was suppose to keep the balance. However, the opposing sides of his psyche broke his mind.

As far as Equinox is concerned, there's a delicate balance between good and evil, and he's the only one concerned with preserving it. If some bad guy gets too powerful, he'll take them out to keep evil in check...and if a hero starts wiping out bad guys left and right, Equinox will try to keep them in check too.

"Gentleman" Jim Craddock was a notorious highwayman in 19th-century England, but as his fame spread, he began to seek something more than simple wealth. In search of the ultimate power he made a deal with the demon Astaroth— in exchange for ten human souls, he would be granted immortality. Unfortunately for him, Astaroth's definition of "immortal" didn't quite match up with Craddock's. When the courts ordered Gentleman Jim hanged for his crimes, his body died, leaving his soul to wander the earth as "Gentleman Ghost," seeking revenge on the living— particularly Batman. As a ghost, Craddock is nearly immune to tangible weapons— only the Thanagarian element "Nth Metal" can touch him if he doesn't want to be touched.

One of the more frequently featured villains in the show. Grodd helped set the tone for the series in the second episode by turning Batman into an ape on Dinosaur Island.

Voiced by Meghan Strange ("Emperor Joker!") and Tara Strong (Scooby-Doo! & Batman: The Brave and the Bold)

A psychiatrist who worked at Arkham Asylum until she met the Joker and grew to love him, eventually becoming his accomplice and on-off sidekick. Harley is seen with the Joker at the antiques museum in "Emperor Joker!" when he is about to steal his memorabilia until Batman shows up. While both the Dark Knight and the Clown Prince of Crime fight each other, Bat-Mite comes along and falls for her. When Bat-Mite accidentally gives all his powers to the Joker in his attempt to help Batman, things start going to hell when the Joker recreates the universe in his own image and uses the Dark Knight as a cosmic punching bag by killing him repeatedly and bringing him Back from the Dead each time. At the same time, both she and Bat-Mite question their faith in their heroes, since the latter care more about each other, and the former wonder if they'd be "better off without [them]".

This incarnation of the Clown Prince Of Crime is as clownish as he's ever been, but underneath the fun-loving, acid-pie-throwing exterior, he lives to destroy Batman at all costs. Which makes it a bit confusing when he has to deal with two of them.

The former boss of Eel O'Brien in his criminal days, Kite Man is a crazed maniac obsessed with kites and Benjamin Franklin due to a childhood incident. His two desires are to be the most famous kite-related person ever, and to get revenge on O'Brien.

A Neanderthal man who gained immortality from the strange light of a glowing red meteor, K'rull believes himself to be intrinsically superior to the mere humans who now rule the globe. He lives for the day when he can overthrow Homo sapiens and take his rightful place as ruler...and don't let his caveman look fool you, because he's more than smart enough to do it.

Manfreda Donatella Face is the wife of Babyface. She has the face of a square-jawed man (complete with a five o'clock shadow), but the voice and body of a normal woman.

Evil ruler of War World, he originally sought to use Jonah Hex as a way to beat batman once and for all, when that failed, he brought a War Moon to earth in an attempt to destroy the world, while also humoring its heroes and villains with a race to see if he'd do it.

Medieval witch. Arthur's sister. You may have heard of her. Enslaved Etrigan in Arthurian times to help take over Camelot and kill Merlin.

Picked on at school for being in choir, he finds that he can control people's minds using his singing voice, resulting in possibly the greatest Musical Episode of anything ever.

AQUAMAN's half-brother, who has had to live in his brother's shadow ever since their mother made Arthur king of Atlantis. He used to be a villain, but has now gotten over that. Really...

Exactly who Owlman is has never been revealed, but what we do know is that he's as evil as Batman is good. Exactly as evil. Batman's counterpart in an alternate universe, Owlman led a team of other such evil twins against the heroes of his world, and eventually defeated and imprisoned all but one. Now, with his Earth subjugated by the Injustice Syndicate, Owlman's sights are set on the conquest of other worlds.

A supervillain with the power of all the planets of the Solar System (and yes, that includes Pluto).

A Germanic mad scientist who once fought the JSA, long ago, going missing when the first Black Canary damaged his equipment, only returning in the modern day and age thanks to a loyal flunky.

Voiced by Jennifer Hale (in the episode Chill of the Night only) and Vanessa Marshall
Known by her real name Pamela Isley, Poison Ivy's work deals with flowers and all things plant, including a giant venus flytrap named Georgia that she once fed Batman to because he refused to marry her.
Professor Zoom

The yellow-clad Evil Counterpart to the Flash, Eobard Thawne is a criminal who hails from the 25th century. His mission is to destroy his lawful nemesis and all that the Flash stands for.

Gaining powers off of others' fears, Psycho Pirate lures his victims into traps that will leave them reliving their worst nightmares so he may feed off of pure fear.

A pair of acrobatic, clown-themed criminals.

A well intentioned villain who wants to protect nature...by destroying human civilization. Despite his views on nature, he's rather old fashioned when it comes to his daughter Talia, feeling that a woman is incapable of succeeding him.

A m-genius scientist on the planet Zur-En-Arrh, and arch-enemy of that world' Batman, the short-tempered Rothul is determined to show the whole world how great his mind is, by stomping it flat. Just after he gets rid of that meddling Batman, first.

An adversary of Plastic Man's, this latex leviathan may not be very bright, but his rubbery nature makes actually knocking him down a difficult prospect.

The Green Lantern of Sector 1417, considered the most peaceful of all sectors in the known universe. However, during the fight against Despero, Sinestro shows his true colours when he turns against the Corps.

Ra's al Ghul's daughter, she wants to be his heir and feels threatened by his interest in Robin. So far she doesn't appear to return Robin's attraction to her.

Fox, Shark, and Vulture are bored millionaires who become martial artists that wear masks of the animals they represent. As members of the Shadow Clan, they plan to steal the Wudang Totem from its respective temple.

Voiced by James Remar and Richard Moll ("Chill of the Night!")

Once Gotham City's DA Harvey Dent, his face got scared and his personality was split. Half good, half evil. His coin decides what the two personalities do. Batman hopes he can be reformed because Harvey was a good friend of Bruce Wayne's.

Voiced by John DiMaggio
The Weeper
Voiced by Tim Conway

An elderly has-been supervillain who originally terrorised Bulletman. After botching his big opportunity to completely destroy Fawcett City many decades ago, he served hard time and retired completely from all criminality... at least, until the Joker discovered him and vowed to help bring him back into the villain game.