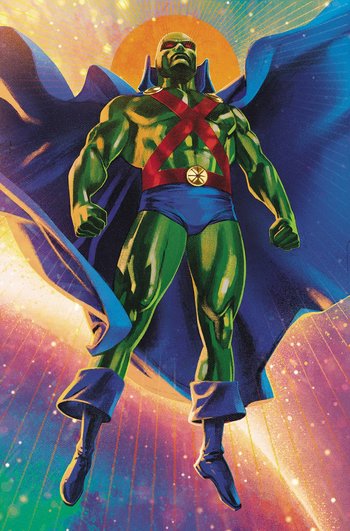 "My name is J'onn J'onzz. I am the sole survivor of a ravaged world. I will not see the same thing happen to Earth."

A Martian who was accidentally teleported to Earth by Professor Erdel, J'onn J'onzz assumed the guise of recently deceased detective John Jones in order to fight crime on Earth, and conceal himself from humanity. Outed by villainous Martian B'rett, J'onn joined the JLA, serving with them until his home planet was destroyed by Commander Blanx. Locating his few surviving people, J'onn tried to help them build new lives on Mars II, but was driven out by The Marshal, eventually rejoining the JLA.

In the Post-Crisis world, Mars was retconned into having been devastated decades ago, and J'onn's time on Earth was lengthened considerably; he was now one of the few superheroes to have been operating from the 1950s until the dawn of the Modern Age. A founder and core member of the JLA, Post-Crisis J'onn is regarded as the "heart and soul" of the team. 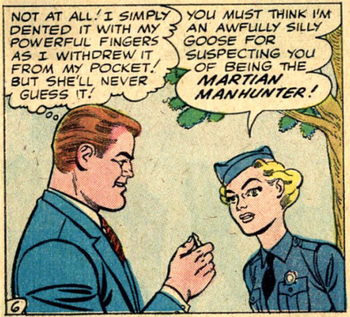 A police officer who served as John Jones' partner in the Silver Age, and as a member of his detective agency in the Modern Age, making her one of his few supporting cast members to have any sort of staying power. 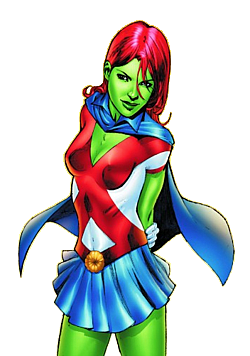 "I don't want you hurting any more Earth people. That wouldn't be nice."

A White Martian with a conscience, M'gann M'orzz joined Earth's Teen Titans' while pretending to be another surviving Green Martian. She is something of a protege for J'onn, serving as a surrogate niece to him. 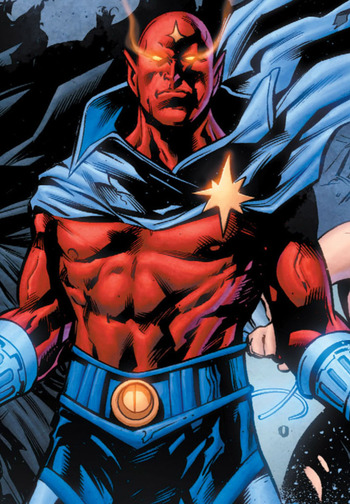 A Red Saturnian, his people are directly related to the Martian peoples and bear many similarities and powers. He was prince of the Red People, who were at war with the White Saturnians and forced to flee the planet after his father was killed. 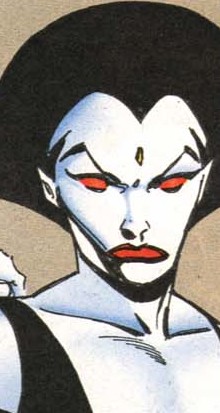 Appearing prominently in Rings of Saturn storyline, she is the White Princess of Saturn who is arranged to marry with Jemm in order to bring peace to their planet. 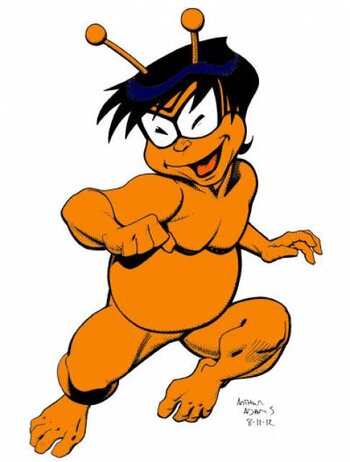 J'onn's sidekick in the Silver Age, an extradimensional being that followed two criminals from his own world to Earth, helped J'onn defeat them, and remained on Earth when the space warp closed. He's intelligent enough to learn English, but apparently not quite fully sapient, with J'onn sometimes calling him a pet. He resembles a humanoid dog with antennae.

"To protect myself I started a war..."

A Bronze Age Femme Fatale who encountered J'onn J'onzz on several occasions, Bel Juz was a treacherous Desert Dweller (Green Martian), who sold out her surviving people to Thythen invaders, in the aftermath of Commander Blanx's attempted genocide. When the Thythen were defeated, Bel became involved with The Marshal of the Red Brotherhood, encouraging his invasion of Earth in a desperate attempt to cover up her involvement in the near destruction of her people. 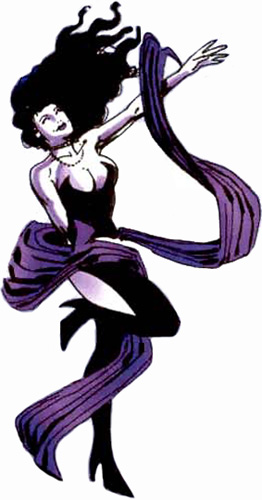 One of the DNAliens created by Cadmus Labs, Bette Noir is a hideous, immobile blob, incapable of leaving the laboratory in which she is imprisoned. She does however, have one thing going for her—the ability to project her consciousness out of her body and feed on the psychic energies of others. She clashed with J'onn a couple of times during his Post-Crisis, Pre-Flashpoint incarnation. 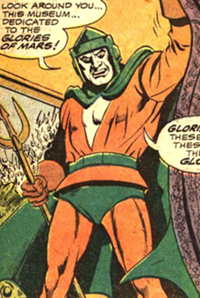 "According to the aliens' code, I could only sell Mars if I was the last living Martian..."

The leader of the Pole Dwellers (Silver and Bronze Age precursors to today's White Martians), Commander Blanx was a cold-blooded opportunist who aimed first to conquer, then to enslave, and then finally, to annihilate, all Martian life, in a bid to sell the planet to an offworld mining corporation. Restarting the war between the Pole Dwellers and the Desert Dwellers, Blanx exiled his rival, J'onn J'onzz to the wastes, seized control of Mars, and then finally harnessed the Blue Flame of Mars to slaughter Pole Dweller and Desert Dweller alike. Killed in single combat by J'onn he has not appeared since. 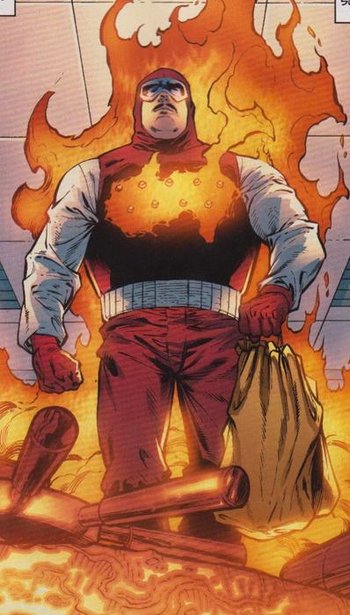 AKA: Michael "Mike" Miller
"Impossible? I'm the Human Flame, Milo. I eat impossible for breakfast and crap out unicorns!"

A low-brow thug with just enough intellect to be dangerous to himself and others, Mike Miller was an absolute nobody, until he built a special flamethrowing suit in order to ward off the police and the Martian Manhunter. Incarcerated, he was eventually freed by Libra, who transformed him into a cyborg. Playing a pivotal role in the "death" of the Martian Manhunter, Miller had himself augmented again and again to try and ward of the JLA, eventually becoming a radioactive mass of living fire. 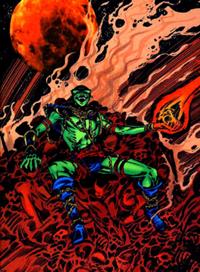 "You knew nothing of me on Mars when I engineered the death of our race under your very nose! You understood nothing of me when I destroyed your new life on this joke of a planet! And you understand nothing of my life as I end yours by ripping you apart muscle by sinew!"
J'onn J'onzz's twin brother in Post-Crisis continuity, Ma'alefa'ak, alias Malefic, is a sociopathic mind rapist and serial murderer turned genocidal madman. Stripped of his psionic powers following his capture, Malefic gained his revenge by engineering H'ronmeer's Curse, a psychic plague that killed almost every Green Martian on the planet. He later followed J'onn to Earth, where he was killed following an assault on the JLA.
The Marshal
AKA: Unknown 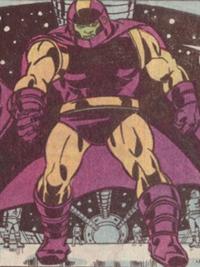 "Here we languish, beggars on a hostile world far from our native sun. Forced to grub for survival like insects in the dark—when there are those who live in light, on a world that should be ours...While we huddle on this barren rock, our sacred lands are raped—by those who mock our fate!"

Genetically engineered to be the ultimate Martian warrior, The Marshal of the Red Brotherhood was a powerful political and military figure on Mars II during the Bronze Age. Following Blanx's near destruction of all Martian life, and the encounter with the Thythen, The Marshal, at Bel Juz's urging, carried out a coup d'etat against J'onn J'onzz, and then launched an invasion of Earth.

"They are not regular members of my syndicate... and therefore expendable!"

A European mobster who headed up the international syndicate known as "Vulture", Mr. V was a masked presence who operated through legions of underlings, including one Body Double after another. Confronting J'onn repeatedly throughout the sixties, Mr. V, dubbed "Faceless" by J'onn, was the first enemy the Martian Manhunter truly loathed. He's vanished since the Silver Age, leaving a number of unanswered questions. 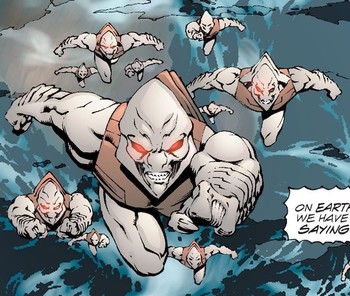