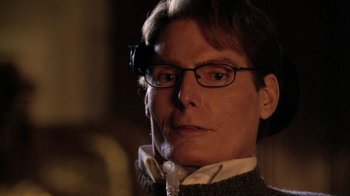 "You must write your own destiny... Kal-El."
A wealthy scientist, Virgil Swann dedicated his life to seeking out and establishing contact with extraterrestrial life. In 1989, he received a transmission from outer space and eventually deciphered it as a message from Krypton telling of the destroyed planet's last survivor, Kal-El.

Fourteen years later, after seeing a newspaper photo of a Kryptonian symbol burned into the Kents' barn, Dr. Swann tracked down Clark Kent and invited him to his laboratory at the New York City Planetarium; when Clark came to visit him, he told him of his Kryptonian heritage and encouraged Clark to pursue his own destiny. In Season 3's "Legacy," it was revealed he was an old acquaintance of Lionel Luthor, who attempted to get info about Clark out of him. At the end of the episode, Swann somehow managed to get ahold of the key to Clark's spaceship.

In Season 4's "Sacred", Swann died of unknown causes, though not before returning the spaceship key to Clark along with a final letter of encouragement. In Season 7, it's revealed that Swann, along with Lionel, the Teagues, and the Queens, founded a secret society called Veritas that was dedicated to protecting Kal-El (known to them as "The Traveler"). Swann also kept a journal that was passed down to his daughter Patricia, who gave it to Clark. 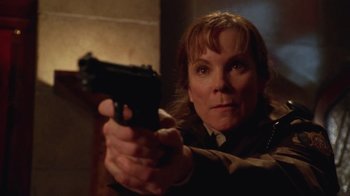 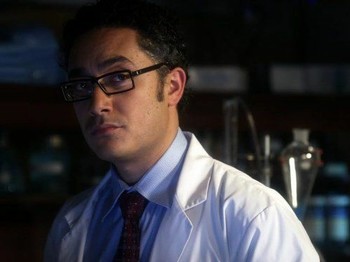 A doctor and surgeon at Metropolis General Hospital, Emil is kept on retainer by Oliver Queen beginning in Season 8; as Green Arrow's inside man, his job is to look the other way when a member of the team comes in with bullet wounds or even weirder injuries. Emil's role quickly evolves, however, and he becomes the team's tech-guy, biologist, coroner, and confidant all rolled into one. He's been to Watchtower, examined Doomsday's blood, and whipped up cures for zombie viruses, among other things. All in a days work for a Super Hero's MD.
Det. Maggie Sawyer

A reoccuring ally who first met Clark in Season 2 as a lieutenant, and later appering in one episode for Seasons 3, 5 and 7. She also appeared in the Season 11 comics working with Dan Turpin, who previously appeared in a Season 8 episode.
Advertisement: 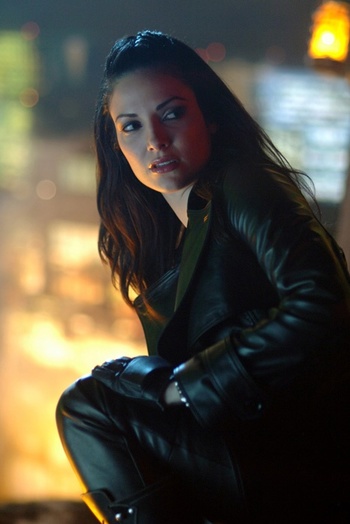 A girl who received meteor powers from a heart transplant from someone who has been killed by a meteor. She fights crime in Metropolis and is named "Angel of Vengeance" by Chloe.
Legion of Superheroes 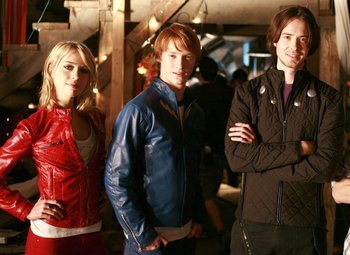 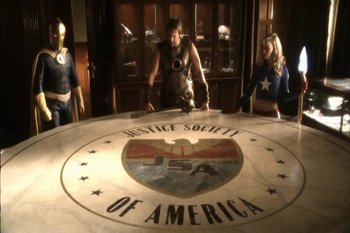 An intergalactic police force created by the Guardians of the Universe. However one of their members, Hal Jordan, was possessed by Parallax and used to decimate the Corps into only a few members.
Advertisement:
Mera 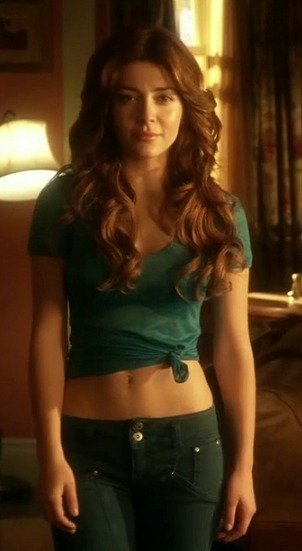 The crime fighting partner to Bruce Wayne/Batman, but unlike her mentor she is far more optimist and has more of a sense of humour. This optimism eventually led her to be chosen as a Blue Lantern and she left to explore her new abilities, but not before arranging for her boyfriend Dick Grayson to take her place. 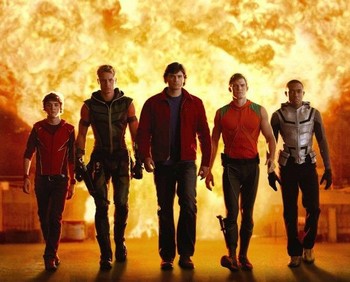 The Original Five
A team assembled by Oliver Queen in Season 6 with the intent of taking down LuthorCorp's Level 33.1, the Justice League has gone through many goals and a constantly rotating membership ever since. Simultaneously an elite strike team and a Ragtag Bunch of Misfits, the as-yet-unnamed League has handled everything from Corrupt Corporate Executives to alien invasions, all while doing their best to stay under the radar.
Oliver Queen / Green Arrow 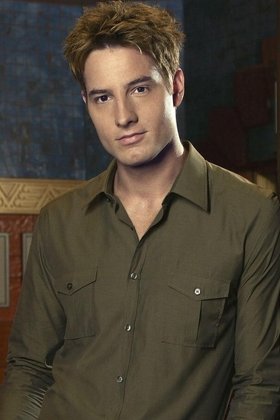 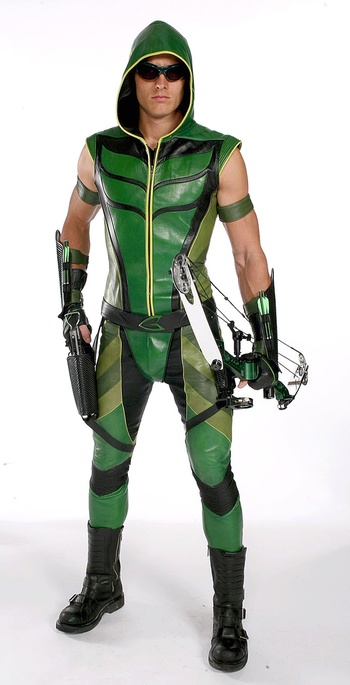 A billionaire playboy on the surface, Oliver was orphaned at a young age. This experience, combined with being stranded on an island a few years before the series began, prompted him to become a crimefighter, putting the archery skills he learned on the island to work as the Green Arrow, a leather-clad vigilante, with a sometimes shaky moral code.

First arriving in Metropolis in Season 6, Oliver dated Lois Lane and clashed with Clark over whether a pro-active or reactive approach was the best way to deal with crime. Frustrated with Clark's Heroic Neutral tendencies, Oliver gathered the proto-Justice League in an effort to shut down his old classmate Lex Luthor's Level 33.1 laboratories, eventually leaving Smallville (and Lois) to fight LuthorCorp all over the world.

Returning briefly in Season 7, Oliver had his secret outed in front of Lois during a battle with Black Canary. In Season 8, he became a regular cast member. This led to many revelations about his past, including his tortured relationship with Tess Mercer, whom he assists in taking over LuthorCorp. Oliver would go on to struggle with an intensification of his already-existing feelings of self-loathing, emptiness, and alienation. Entering a relationship with his girlfriend seemed to help snap him out of it, but her disappearance early in Season 10 sent Oliver into another downward spiral.

A deeply screwed-up young man with an extremely negative view of himself and the world, Oliver has clashed with the more idealistic Clark on many occasions. Despite this, he remains a loyal friend to the future Superman, a great (if flawed) Superhero, and one of the biggest badasses in the entire show. 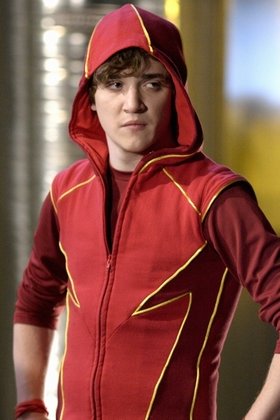 A former thief gifted with Super Speed, Bart first met Clark when he saved Jonathan Kent from being hit by a car...only to immediately pick his pocket. After a rough beginning, he and Clark became friends, and Bart left town looking for other people like themselves. He later returned as a member of the Justice League and has been a key member ever since, able to respond to crises moments after they begin.
Arthur "A.C." Curry / Aquaman 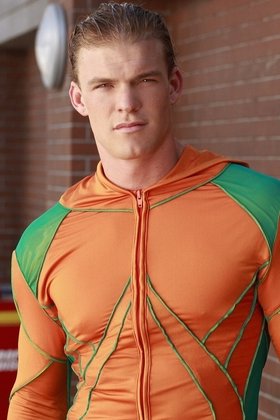 A lifeguard with a penchant for eco-terrorism and corporate sabotage, A.C.'s attempts to destroy an environmentally unfriendly weapon developed by LuthorCorp ensured that he and Clark didn't get off to the best of starts. They were able to put their differences behind them, however, in the interests of stopping Lex; following this, A.C. left Smallville. After nearly being killed while sinking a whaling ship, A.C., now calling himself "Aquaman," was drafted into Oliver's superhero team after the latter saved his life. Captured and experimented on by LuthorCorp agents alongside Black Canary, A.C. went underground (or should that be underwater?) for some time, before resurfacing in Season 10, newly married and calling himself "Orin".
Victor Stone / Cyborg 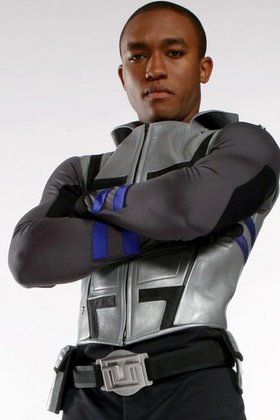 Presumed dead in the car crash that killed his parents and sister, Victor Stone was saved by LuthorCorp and resurrected as part of an experiment in cybernetics. Clark saved him from Lex's men and reunited him with his girlfriend, Katherine. Sometime afterwards, Victor and Katherine broke up, which led to him living on the streets; he was recruited by Oliver, who gave him a place to stay and a reason to keep on going.
Dinah Lance / Black Canary 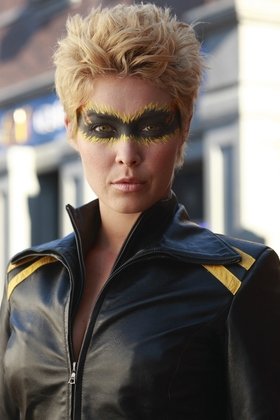 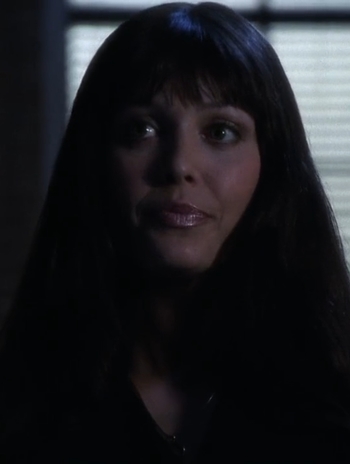 A right-wing vigilante with a passionate interest in justice, Dinah first appeared in Season 7, when she was hired by Lex Luthor to arrest Green Arrow, whom she believed to be a common criminal. After realizing she was on the wrong side, Dinah joined Oliver's team, helping to fight injustice round the world. She participated in the hunt for Clark in Season 8, helped battle Doomsday and Major Zod, and was most recently seen breaking out of the VRA's virtual prison in Season 10, alongside Clark, Oliver, Chloe, and Lois.
J'onn J'onnz / Martian Manhunter 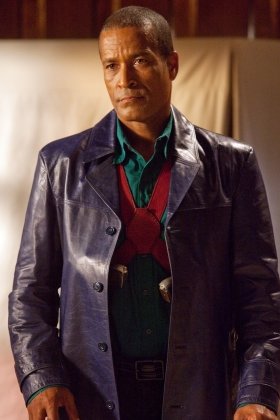 The last survivor of the extinct Martian race, J'onn J'onnz was a former intergalactic police officer, tasked with pursuing Phantom Zone criminals. A friend of Clark's biological father Jor-El, he was asked to watch over Kal-El after his arrival on Earth. First appearing in Season 6 as a guardian figure during Clark's battles with the Zoners, J'onn is depowered in the Season 8 premiere "Odyssey" after saving Clark's life, and takes on the identity of police detective John Jones. He serves as Clark and Oliver's contact inside the Metropolis PD; eventually regaining his powers thanks to Doctor Fate, he now works with the Justice League on an ongoing basis.
Tess Mercer / Red Tornado
See the Smallville: LuthorCorp page.
Bruce Wayne / Batman

Motivated by the murder of his parents, Bruce Wayne dedicated his life to become the vigilante Batman. First appearing in the Season 11 comic story Detective, he became a good friend of Clark's and a part time member of the Justice League. He protects Gotham with help from Barbara Gordon, who operates as his partner Nightwing, but after she joins the Blue Lantern Corps she makes arrangements for Dick Grayson to replace her.
Diana of Themyscira / Wonder Woman

Princess of the Amazons, Diana first met Clark in the Season 11 comic story Olympus while searching for her missing mother Hippolyta. After finding her and reuniting with her childhood friend Steve Trevor, she decides to remain in Man's World as Wonder Woman and joins the Justice League.
John Stewart / Green Lantern 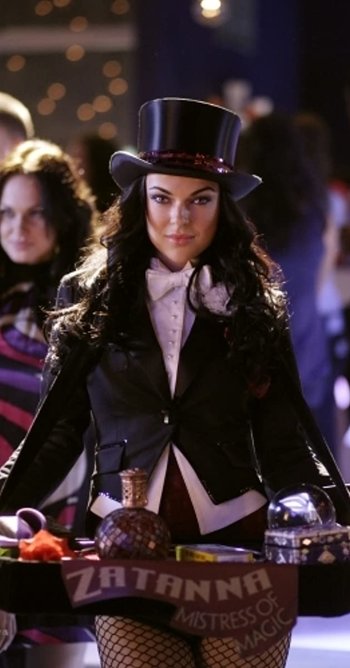 The daughter of the world's greatest magician, Zatanna inherited his magical powers and uses them to fight magical threats.
Booster Gold 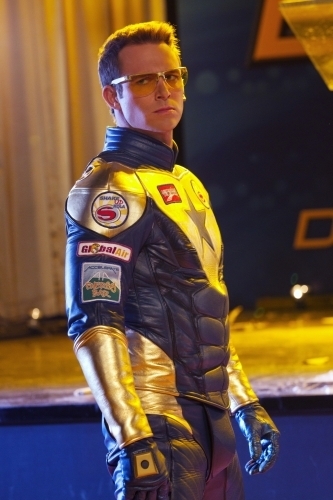 A showboating and fame hungry time traveller from the 25th century who travelled to the present to take Superman's place as history's greatest hero.

In General
Appearing in the Season 11 comics, the Teen Titans were a group of adolescent super-heroes assembled by Jay Garrick, who also runs the school for these gifted children. Jay created the team to honor the memory of Bart Allen, blaming himself for his death.
Conner Kent / Superboy
See the Smallville: Kents page.
Jaime Reyes / Blue Beetle 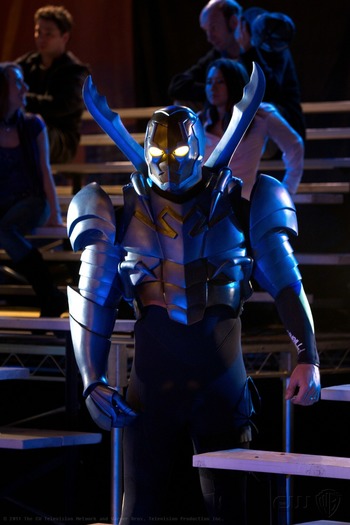 A teenage boy who came into contact with alien technology called the Scarab in the Season 10 episode Booster, and the Scarab briefly took control of his body to cause chaos until Jamie was able to regain control. In the Season 11 comics he joins the Teen Titans while Booster Gold is his mentor.
Mia Dearden / Speedy 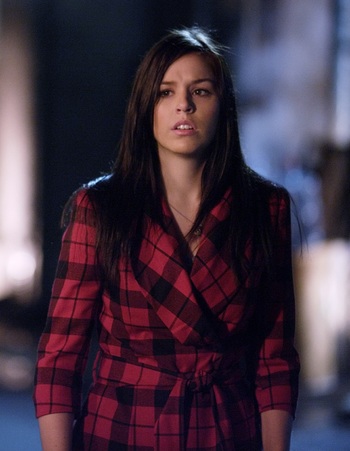 A prostitute and martial artist in a fight club, Oliver took her under his wing with the desire to make her a better fighter and help her improve her life. While there was some difficulty at first she evnetually accepted and learned he was the Green Arrow before becoming his student. In the Season 11 comics she had taken the codename Speedy and became a member of the Teen Titans.
M'gann M'orzz / Megan Morse / Miss Martian

First appearing in the Season 11 comics, she is the last surviving White Martian who was raised by Checkmate agent King Faraday until she was saved by Martian Manhunter and Batman.
Rachel Roth / Raven

First appearing in the Season 11 comics, she was going to be sacrificed by a cult to summon Trigon before she was saved by Zatanna and John Constantine.
Zan and Jayna / Wonder Twins

Admirers of the Blur the twins attempted to be heroes like him but due to their youth and inexperience they caused more harm than good before Clark and Chloe could help them figure out what they were doing wrong. In the Season 11 comics they end up joining the Teen Titans.

Yes, Clark actually met Father Christmas himself in the Season 5 episode "Lexmas" in a subplot where Clark, while delivering presents as a favour for Chloe, encounters a drunk Santa complaining about the state of the world. However a conversation with Clark renews his faith in the spirit of Christmas and he appears at the end of the episode to prove he wasn't just a drunk man dressed as Sana Claus.
John Constantine

A friend of Zatanna who helped her save Rachel Roth.

A team created by the D.E.O. and put under the leadership of Oliver Queen in the final Season 11 story arc Continuity.
Dick Grayson

The boyfriend of Barbara Gordon who decided he would be a good successor as Batman's partner.
Billy Batson

The neighbour to John Jones who is also a fan of Superman while also having a friend named Mary.
Ted Kord

The CEO of a major defense company that handles sensitive technology. He encounters Clark after sending Booster Gold to retrieve Blue Beetle's scarab. He also appears in some of the season 11 comics.