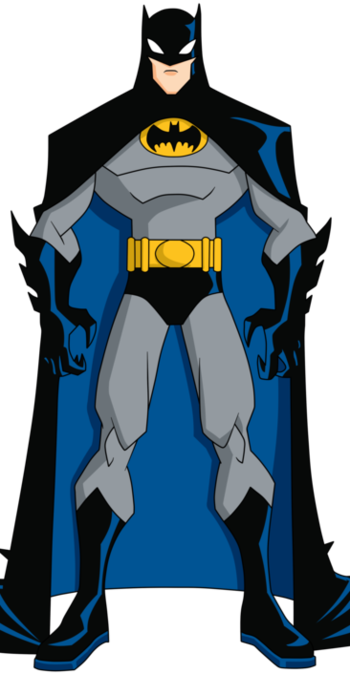 Voiced by: Rino Romano
"Let's hope it's not the Batman that brings out the freaks..."

Son of wealthy entrepreneurs Thomas and Martha Wayne, who were gunned down one evening coming out of a theater as a young Bruce watched. Vowing to take revenge on the criminal underworld, he spent years abroad to hone mind and body so he could act as Gotham City's midnight vigilante, using martial arts, stealth and the imagery of a bat to intimidate his prey. He is the CEO of Wayne Industries, developer of technologies such as his customized vehicle the Batmobile), and a communicator device called the Bat-Wave. The Batman follows a 26-year-old Bruce during the adventures in his third year as Batman. 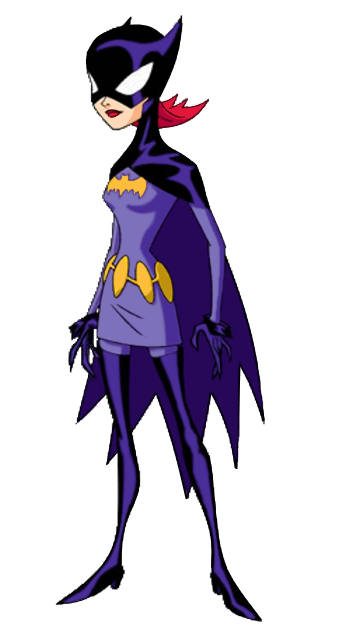 Voiced by: Danielle Judovits, Kellie Martin (as Oracle in "Artifacts")
"Some first day as a sidekick. I failed to stop Ivy, my aim needs work and I blew my secret identity."

The daughter of Gotham City Police Commissioner James Gordon, who joins Batman's war on crime during Season 3, taking on the persona "Batgirl" when patrolling the city. Unlike the comics, Batgirl joined Batman before Robin did.

Voiced by: Evan Sabara, Jerry O'Connell (as Nightwing in "Artifacts")
"A robin? Like the bird? You know, kids my age get beat up for nicknames like that."

A young boy whom Bruce Wayne adopted after his circus acrobat parents were killed by a gangster named Tony Zucco. Bruce trains him in order to bring Dick into his crime fighting family, who adopts the moniker "Robin". Comes into the show in Season 4, which differs from the comics as Batgirl had already been a part of Batman's team by that point.

Voiced by: Alastair Duncan
"Oh, Master Bruce. I am so very sorry. I can never replace them, but I promise you, I will never ever leave your side."

The Wayne family's loyal retainer, who raised Bruce through his traumatic childhood following the murder of his parents. He is privy to Bruce's secret identity as Batman, and maintains the Batcave whilst Bruce is in the field.

Supporting Charactersnote Including other allies of Batman, friends of Bruce Wayne, and Gotham City government/police employees 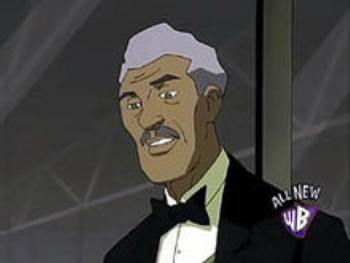 Bruce Wayne's business associate, and one of the few people who knows that Wayne is actually the Batman.
Vicky Vale 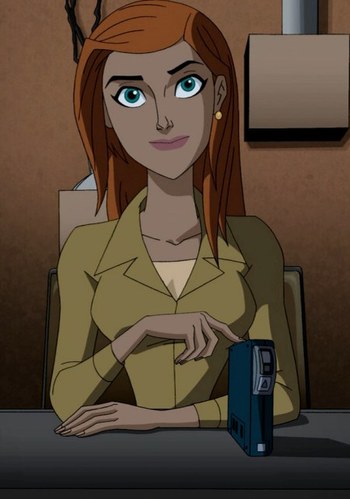 Voiced by: Tara Strong
"What is it about you that keeps me coming back? Your boyish charm... hot bod... tons of money... if only I were shallow."

A news reporter who served as a love interest of Bruce Wayne. Count Dracula becomes interested in her as well, choosing Vicky as the vessel to resurrect his bride Carmilla.

Marion Grange was a close friend of Thomas Wayne, and is close to his son Bruce as well. He is the Mayor of Gotham City for the first three seasons. He is absent from Season 4, and is replaced by Hamilton Hill in Season 5. 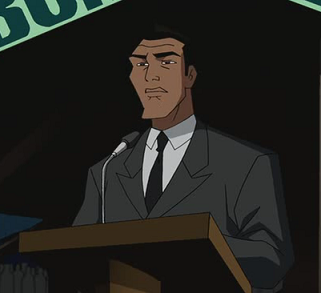 The mayor of Gotham after Mayor Grange resigns from the office. 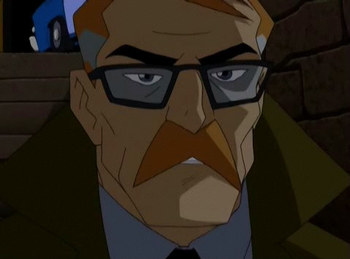 Voiced by: Mitch Pileggi
"All I ask is that you help me make Gotham a safe place for my daughter to grow up in."

Barbara Gordon's father and Gotham City's police commissioner. He has been a secret ally of Batman for years, before finally making his support public and allowing Batman to legally continue his vigilantism, as it's the only way to deal with Gotham's unique band of criminals. 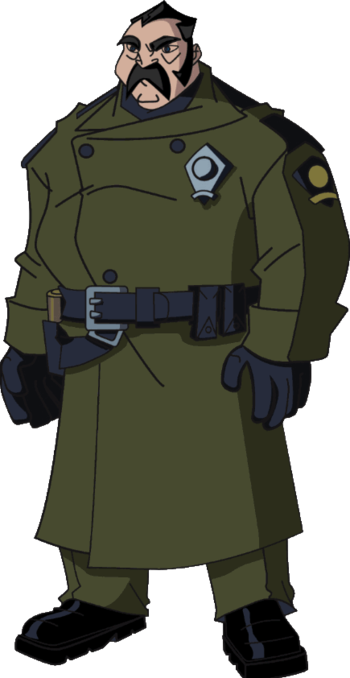 "Bring me this Batman. Whoever he is."
Voiced by: Edward James Olmos ("The Bat in the Belfry"), Jesse Corti (all other appearances)
"Six months ago Gotham had the lowest crime rate in the nation. Yesterday, we were declared "The World's Scariest City"!"

GCPD's jerkass police chief who mistreats his employees, and prioritizes Batman's arrest over those of the actual villains. 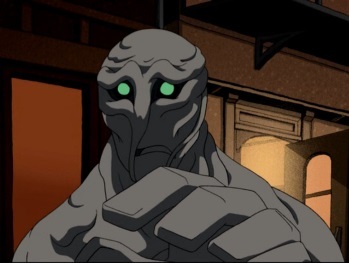 Voiced by: Steve Harris
"I really believe the Bat's helping Gotham even if he is on the wrong side of the law. But he's getting a bad rap and the heat's on me to take him down"

Ethan Bennett is Bruce Wayne's childhood best friend who is unaware of Bruce's alter ego, the same one he's assigned to take down by Chief Rojas. This puts Bennett in a bad place, as he not only does not want to arrest the Batman, he believes that the Bat is helping Gotham. Unfortunately, Joker kidnapped, tortured, and exposed him to a mutagenic chemical that turns anything it touches into a clay-like substance. With both his skin and his mind melted by the Clown Prince of Crime, Bennett becomes the criminal Clayface.

Voiced by: Ming-Na Wen
"I'm sure the Batman means well, but he's still a vigilante. And according to the law, Batman, that makes you a criminal like the rest."

Ellen Yin is a police detective who transferred from Metropolis PD to Gotham PD in the first episode. Rojas assigns her as Ethan Bennett's partner. Unlike Bennett, Yin is determined to arrest the Batman at all costs, even if Batman is ultimately better for Gotham. 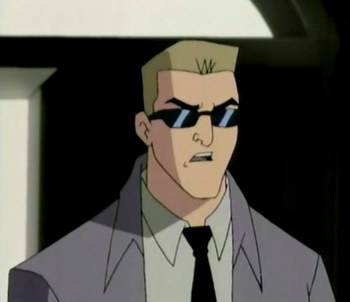 Voiced by: Patrick Warburton
"Well, I hope clownie's out for some Cash. Because it's payday, baby."

A bumbling and overconfident police detective, who briefly serves as Yin's new partner after Ethan Bennett becomes Clayface. This alliance doesn't last long, but he still shows up on occasion when supervillains appear. 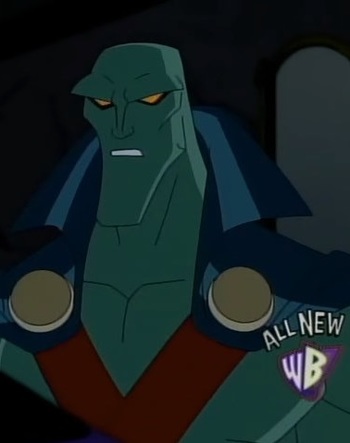 A shapeshifting alien from the planet Mars, and the last of his people. Living on Earth under the guise of a human detective, he warns Batman about the Joining's plans to attack their world. After thwarting the alien invasion, Batman and Martian Manhunter recruit other superheroes to form the Justice League. 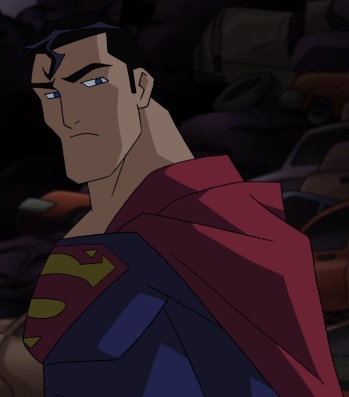 An alien from the destroyed planet of Krypton, and its only survivor. Raised on Earth by a human couple in Smallville, Kansas, he currently resides in Gotham's sister city of Metropolis, which he protects with his vast array of superhuman abilities. Despite his initial reluctance, he teams up with Batman and eventually joins the Justice League. 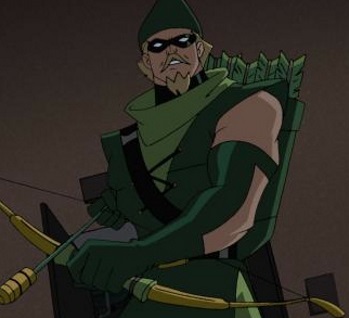 A wealthy businessman from Star City, who decided to become a costumed, non-superpowered vigilante (coincidentally, he's much like Bruce Wayne). He fights crime using his superb archery skills, armed with a bow and a wide variety of different arrows. 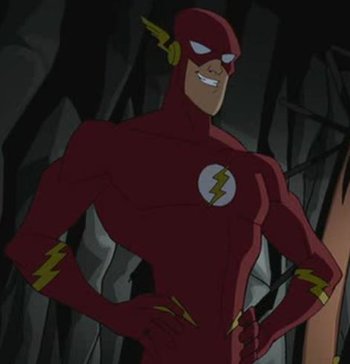 A forensic scientist from Central City, who gained the ability to move at incredibly fast speeds. 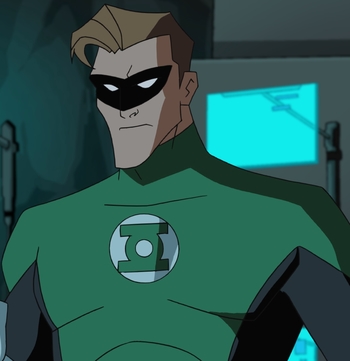 A human pilot and member of the Green Lantern Corps, an intergalactic peacekeeping force. Like other Green Lanterns, Jordan is armed with a ring that allows him to materialize objects made of green energy. 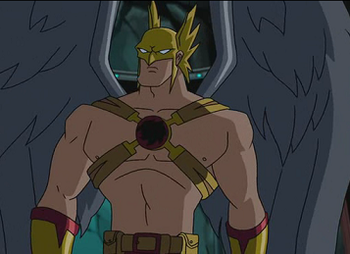 An alien policeman from the planet Thanagar, equipped with Nth metal technology that gives him the ability to fly, and he fights with a mace.