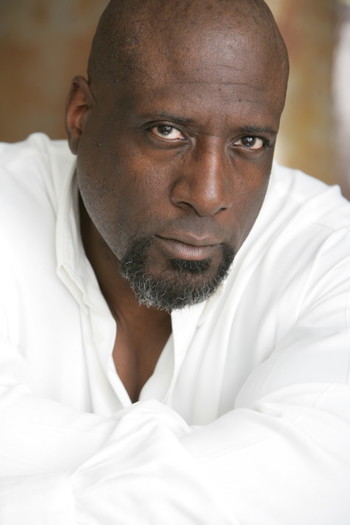 Need a guy to play a villain, with a very deep voice? Kevin Grevioux is your man.

Kevin Grevioux (born September 9, 1962 in Chicago, Illinois) is an American actor and voice actor, best known as Raze in the first Underworld. He's also Dekar in I, Frankenstein, Black Beetle in Young Justice, Terrax in The Avengers: Earth's Mightiest Heroes!, and the Super-Skrull in Hulk and the Agents of S.M.A.S.H..

He's also One of Us, being a fan of comics. He even formed two comics studios and has written comics, including the comic I, Frankenstein was based on and creating Blue Marvel. He was also the co-writer of Underworld. Oh, and he's a Genius Bruiser, too, he was working on getting a Master's degree in genetic engineering before he became an actor. He also has a degree in microbiology, and minors in both chemisty and psychology. In fact, a lot of the science in Underworld came from him.