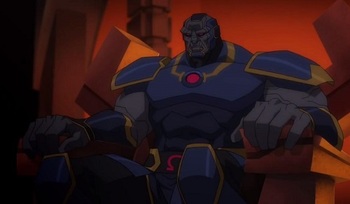 The Lord of Apokolips who invades Earth and forces the heroes of Earth to band together and stand against him. 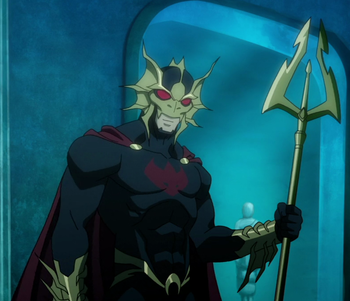 The half-brother of Aquaman. Outraged by his father's death during the Justice League's battle with Darkseid in War, Orm declare war on the surface world.

A man donning a robotic suit that vaguely resembles a manta ray. He aids Ocean Master in his quest to start a war between Atlantis and the surface world, and is later arrested and inducted into Amanda Waller's Suicide Squad. 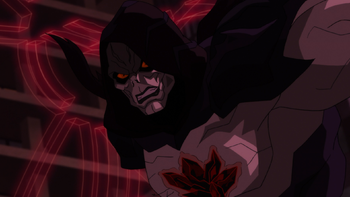 A former man of science until he went insane 500 years ago and tried to take over using the Dreamstone, he was defeated but he comes back in the modern day. 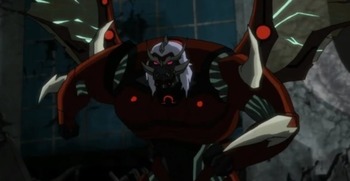 Paradooms are genetically engineered soldiers that were created by combining Parademons with Doomsday's genetic code.
Advertisement: 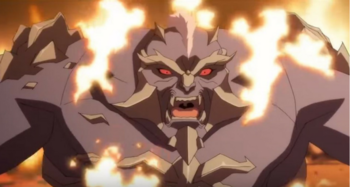 Appearances: The Death of Superman

A mysterious and powerful monster sent to Earth to kill the Justice League.
Cyborg Superman/Hank Henshaw 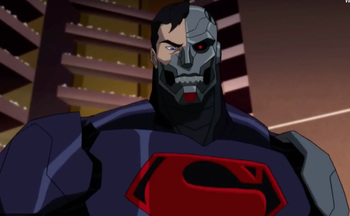 A former astronaut who becomes a cyborg supervillain bent on revenge against Superman.

Metallo/John Corben
A dying soldier that was transformed into a powerful cyborg with a Kryptonite Heart.
Advertisement: 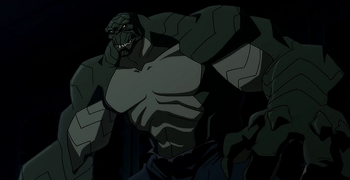 A large criminal with a reptilian-like skin condition.
The Joker

The Clown Prince of Crime and arch nemesis of Batman. Once a petty criminal who accidentally fell into a vat of chemicals that drove him insane.
The Dollmaker/Anton Schott

A serial murderer that kidnaps children to turn them into obedient "Dolls".
Talon 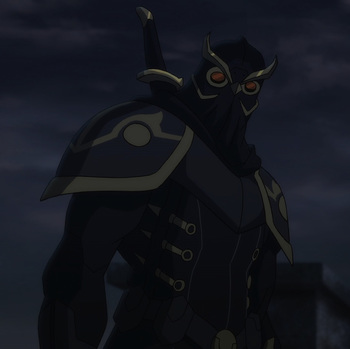 The muscle of the secret Court of Owls who is interested in recruiting Damian as his apprentice.
The Grandmaster/Samantha Vanaver

The current leader of the Court of Owls.
Scarecrow/Jonathan Crane

An sadistic and aggressive mobster that wears a black mask. Eventually the mask is burned into his head.
Blockbuster 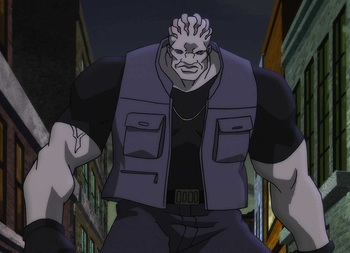 A Bludhaven mobster with a strange skin condition.
The Penguin/Oswald Cobblepot 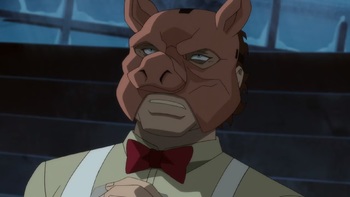 A deranged doctor in a pig mask with a penchant for performing horrifying surgeries.

A mysterious criminal that covers his face with bandages and has a vendetta against Batman. 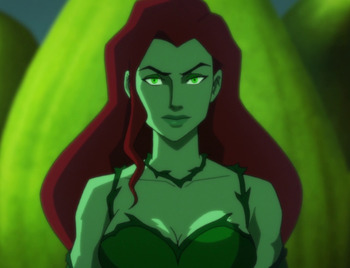 A criminal with the ability to manipulate plant life and mindcontrol humans.

League of Assassins and Associates 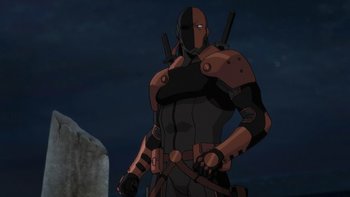 A former member of the League of Assassins who tried to usurp control away from Ra's al Ghul after Damian was born.

The founder and leader of the League of Shadows; an ancient eco-terrorist organization, and Damian's grandfather.
Talia al Ghul 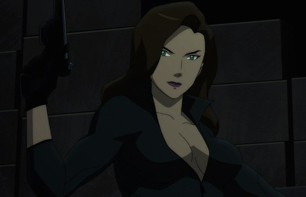 The daughter of Ra's al Ghul, lover of Batman, and mother of Damian. In Batman: Bad Blood she becomes head of the League of Assassins. 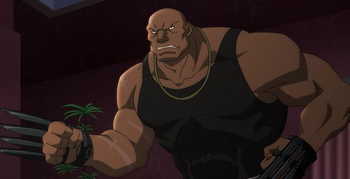 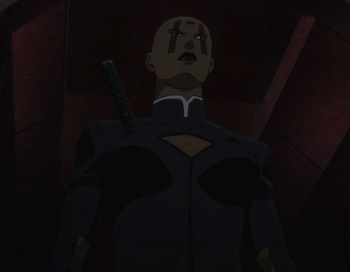 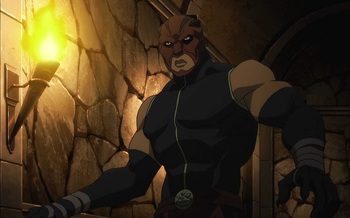 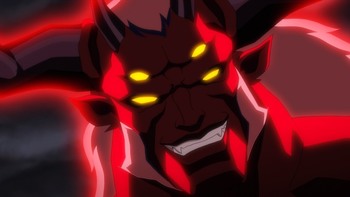 A demon that was summoned by a cult to cross over to Earth, he fathered a girl named Raven to herald his imminent return. 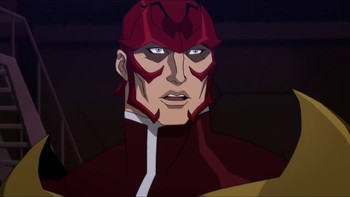 The leader of the H.I.V.E terrorist organization and its public cover, the Church of Blood. He desires to kill the Titans and absorb their life-force and superpowers so that he may become a living god. 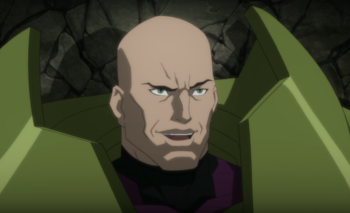 Superman's archenemy and founder of the Legion of Doom. 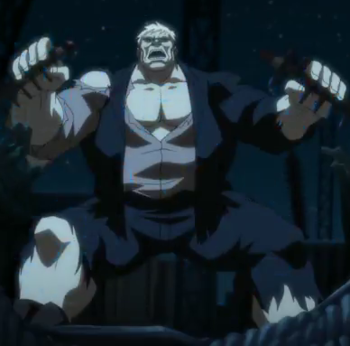 An undead zombie recruited by Lex Luthor to be a member of the Legion of Doom. 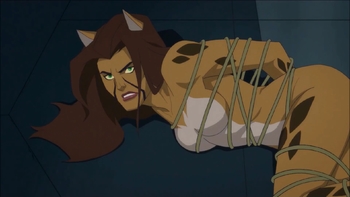 Wonder Woman's archfoe and a member of the Legion of Doom. 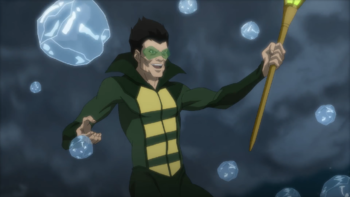 An enemy of the Flash, he can control the weather with a device designed to look like a wand. 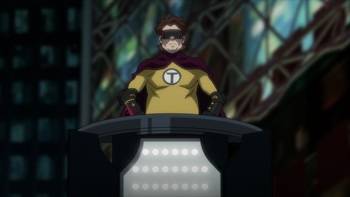 A villain who used robots made to look like toys as part of his crimes.

The Gorgon herself.
Veronica Cale 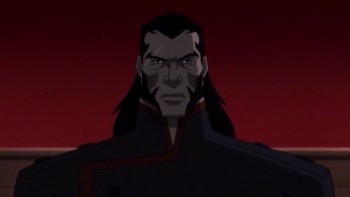 A millennia old immortal caveman who's posed as various figures throughout history. 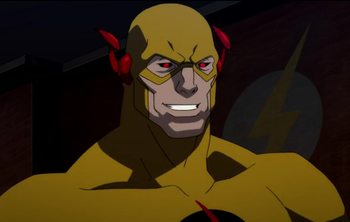 A scientist turned criminal from the 25th century, archenemy of The Flash. 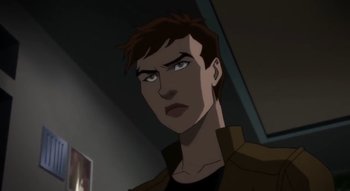 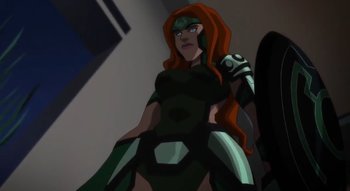 A New God from Apokolips currently in service to Vandal Savage.