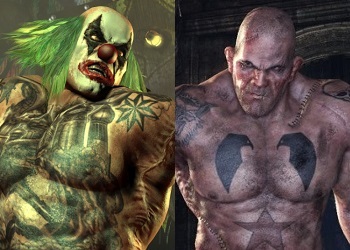 The Abramovici Twins were born in Russia conjoined on the side. With their mother dead in childbirth, their grieving father left them with a traveling freakshow. After growing older, the Joker learned of their existence and sent out Harley to bring them to him. After having the twins separated, Joker kept Hammer as one of his henchmen, and sent Sickle to the Penguin as a joke. The two brothers loyalties were then divided by philosophical differences, and the two continued serving different masters as the walls of Arkham City were built. 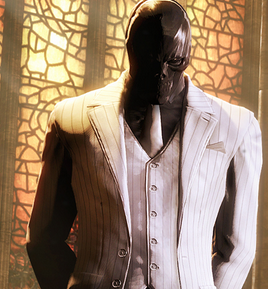 "Kill him and I'll pay you whatever you want. Make him suffer and I'll double it."
Black Mask in Arkham City 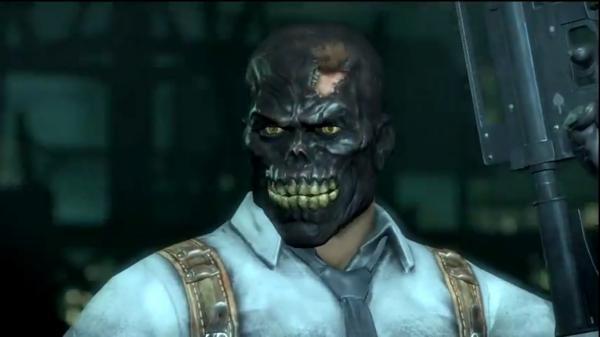 Roman Sionis was the heir to the wealthy Sionis family. His parents were extremely negligent, and after they blamed him for their businesses going under and cut him off from their fortune, Roman burnt their mansion down and killed them. The company was still failing, but was bailed out by Bruce Wayne, causing Sionis to hate him out of resentment. After carving a mask out of his father's black coffin, Sionis tried to take revenge on Wayne but was stopped by Batman, with his mask being burnt into his skin. Sionis thus became Black Mask and turned into one of the most powerful mob bosses in Gotham City. He sought revenge on Batman, and sent eight assassins after him on Christmas Eve during the early years of Batman's career. After being imprisoned in Arkham City, Black Mask was the only prisoner to find a way to escape, although he was quickly caught and subjected to brutal treatment at the hands of TYGER. 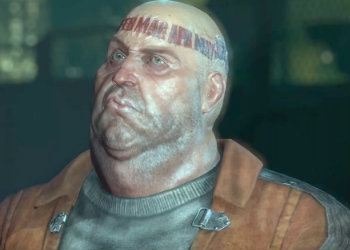 "Thirty days has November. April, June, and September. Of twenty eight is but one. And all the rest are thirty one. Of course leap year comes and slays. Every four years got it right, and twenty eight is twenty nine."
Voiced By: Maurice LaMarche

Julian Day was a man obsessed with dates and their meaning, becoming the infamous criminal Calendar Man and tormenting Gotham City every holiday with insane themed schemes that resulted in the loss of much life. After being imprisoned in Arkham City, Calendar Man took over the Solomon Wayne Courthouse. However, Two-Face soon arrived and captured the courthouse for himself, and locked Calendar Man in a cell in the building's basement. 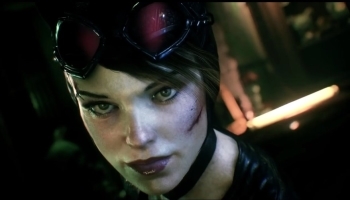 "This place is dangerous. I like it!"
Catwoman in Arkham City 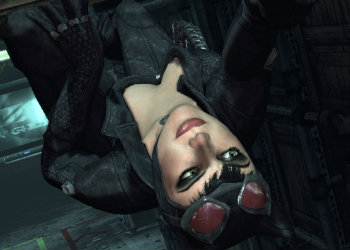 Selina Kyle, aka Catwoman, is a master thief with a complicated relationship with Batman. When Arkham City was opened, Catwoman was one of the last two major criminals on the loose, with Two-Face being the other. After Two-Face sold her out and TYGER confiscated all of her stolen goods, she swore revenge on him and vowed to recover her treasures along with all of the other supervillains' personal belongings that Hugo Strange was keeping in a vault inside Arkham City. 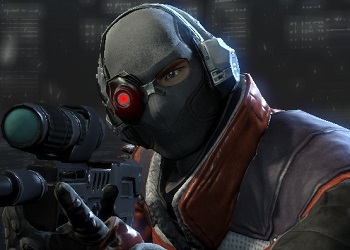 "You're next on my list, Batman. Run if you like. Deadshot always hits his target."
Deadshot in Arkham City 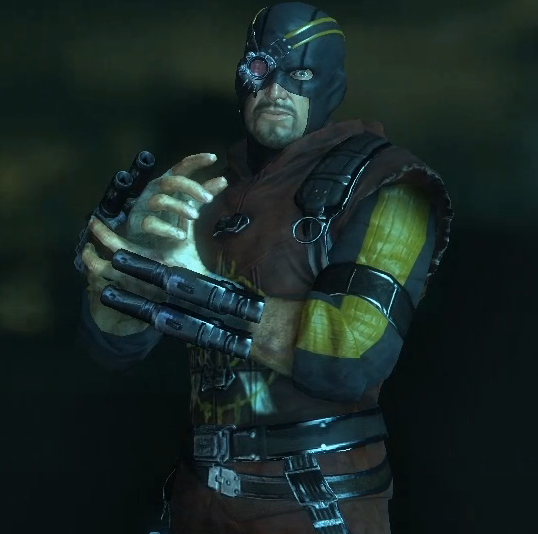 Deadshot is the most lethal marksman in the world, utilizing a wide variety of weapons to kill his targets. He was one of the eight assassins hired by Black Mask to assassinate Batman on Christmas Eve. Later on, he was also hired by Hugo Strange to infiltrate Arkham City and eliminate a group of political prisoners (and Batman) who knew too much about Strange's plans. 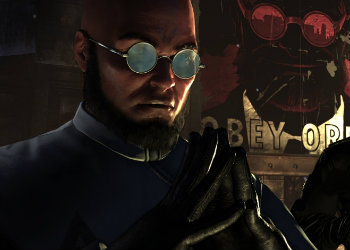 "By the end of tonight, I will be a hero. Just like you... Batman."
Voiced By: Corey Burton

Hugo Strange is a brilliant psychiatrist who is placed in charge of running Arkham City by Mayor Quincy Sharp. He rules the facility with an iron fist using his TYGER guards, and is extremely antagonistic towards Batman, who he has deduced to be Bruce Wayne. He throws Bruce into Arkham City at the beginning of the second game, and begins counting down to "Protocol Ten". 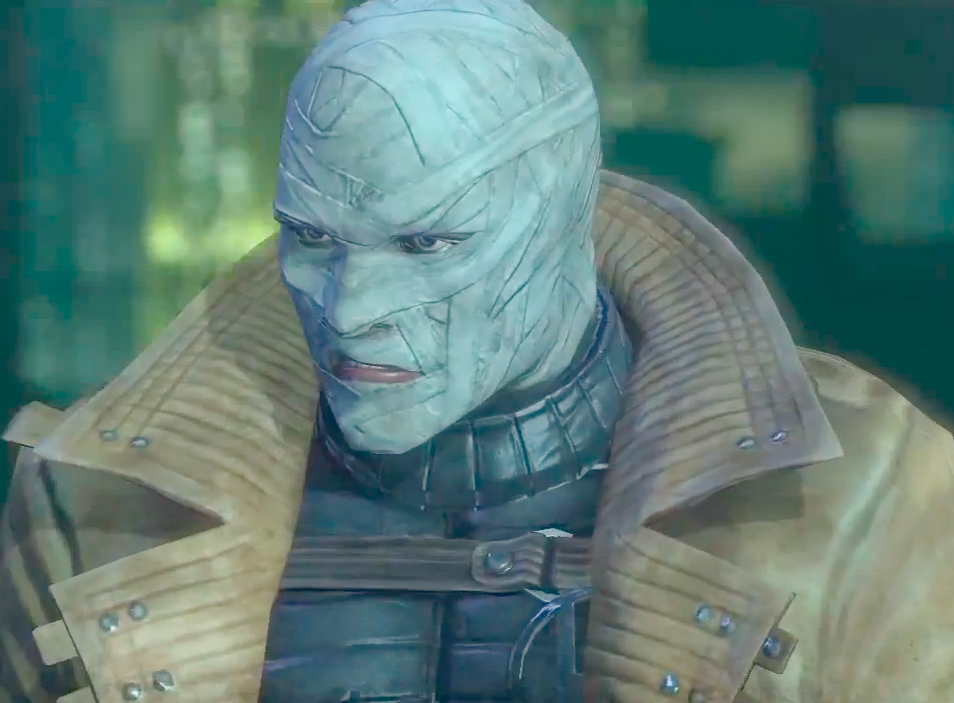 "Wayne will suffer, and you will not stop me."
Voiced By: Kevin Conroy

Thomas Elliot was a childhood friend of Bruce Wayne who eventually became a surgeon. Though he managed to murder his father in a staged car accident, his invalid mother survived, forcing him into a life of caring for her as their money trickled away. Holding a deep grudge, Tommy became so obsessed with hatred for Bruce Wayne that he decided to steal everything he had, including his looks; as Batman found six bodies with their faces carved off in Arkham City, he found Elliot, who revealed himself to have near-perfectly replicated Wayne's face with surgery. Nine months later, Elliot makes his move against Bruce Wayne. 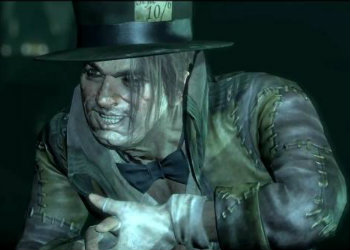 Jervis Tetch was an expert hypnotist and chemist who was obsessed with Alice in Wonderland and came to believe that he was an incarnation of the Mad Hatter from the story. He became obsessed with finding Alice, and murders several blonde women before being caught by Batman and sent to Arkham Asylum. There, he was taken advantage of by Hugo Strange, who had him create mind control substances to help his domination of his TYGER guards. Once he was done with him, Strange threw Mad Hatter into Arkham City, where he gathered a small gang with his mind control devices and sought to add one more member to his gang: Batman. He returns in Knight, now aiming to drive Batman insane to prove that they're Not So Different. 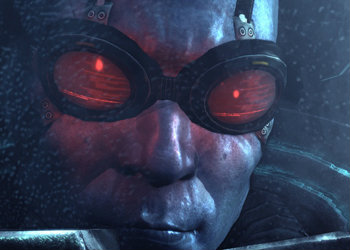 "Have you ever seen a flower die? Watched something that was once so beautiful, so full of life, collapse and rot from within?"
Voiced By: Maurice LaMarche

Doctor Victor Fries is a brilliant cryogenicist who placed his wife Nora into suspended animation as he desperately searched for a cure to her degenerative disease, but a lab accident when the company he worked for pulled the plug on his research led to him becoming cold-blooded and requiring sub-zero temperatures to survive. Donning a specialized suit and utilizing freeze based weapons, Mister Freeze does whatever he must to continue searching for a way to cure his wife. When Professor Hugo Strange arranged for Nora to be sent to Arkham City, Freeze willingly went to the prison to be with his wife and continue searching for a cure, setting up base in an old G.C.P.D. building. When the Joker kidnapped Nora, Freeze was forced to work on a cure to his TITAN poisoning in order to get his wife back. 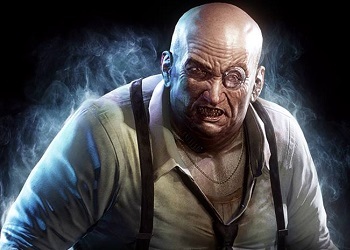 "Welcome to Hell!"
The Penguin in Arkham Origins 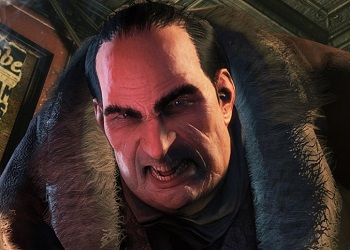 The Penguin in Arkham City 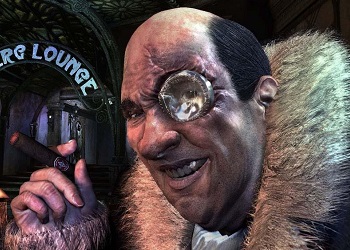 Oswald Cobblepot is the heir to the prestigious Cobblepot family, which has a long rivalry with the Waynes. Educated in England, Cobblepot found more in common with thugs than the elite and returned to Gotham City to take over his family's businesses, take revenge on the Waynes for his family's fall from fortune, and take control of the criminal underworld. Basing his numerous operations out of the Cyrus Pinkney's Institute for Natural History and attached Iceberg Lounge, Cobblepot, known among some underworld circles as The Penguin, ruthlessly began expanding his businesses while being able to avoid being confirmed as a criminal by the G.C.P.D. That situation ended when Arkham City was built and Cobblepot refused to be evicted, entering into a gun battle with the police and TYGER before being sealed into the prison. He controls the largest and best supplied gang within the walls of the prison, and is aiming to take out Two-Face and Joker's crews for complete control. 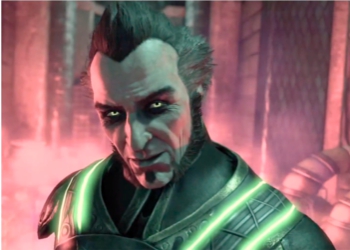 "You disappoint me, Detective."
Voiced By: Dee Bradley Baker

Ra's al Ghul is the head of the League of Assassins and a centuries old terrorist dedicated to cleansing the world in order to save it. One hundred years before the events of Arkham City, he attempted to transform Gotham with Wonder City, but the Lazarus Pit underneath it drove its citizens mad. In the present, he has become obsessed with finding a successor, and wants Batman to take his place. 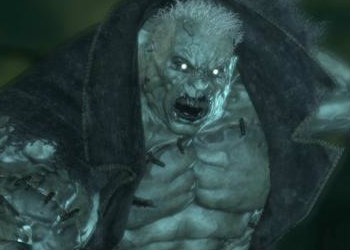 Cyrus Gold was a merchant in Old Gotham who fled into Slaughter Swamp to escape the law after committing murder, but was killed and left there. However, a storm mixed with the swamp gas reanimated Gold but left him with no memory of who he was, able to only recite the nursery rhyme "Solomon Grundy". For more than a century he has been used and experimented on by various factions, with the latest criminal to use him being the Penguin as a means of execution and entertainment in the Iceberg Lounge. 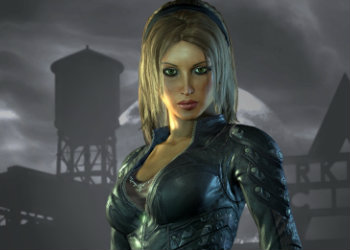 "You must show you are willing to take a life to save the world."
Voiced By: Stana Katic

Talia al Ghul is Ra's al Ghul's daughter and the head of the League of Assassins' legitimate business interests. She and Batman have a complicated history, being both lovers and enemies. She wants nothing more than for Batman to take up her father's mantle as the Head of the Demon, but knows that one day she may have to chose between her father and Batman. Talia is currently residing under Arkham City, within the ruins of Wonder City where the League of Assassins is located. 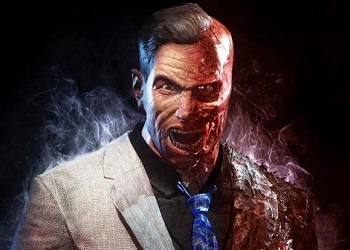 "The only way to get by in this place is to get ourselves some respect... Fear! That's how we get respect! Show them all how we do things!"
Two-Face in Arkham City 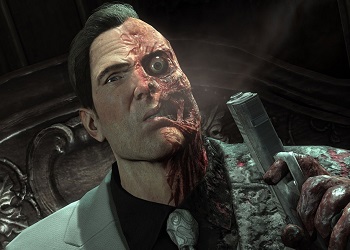 Harvey Dent was a key ally of Batman as the District Attorney of Gotham City, until a criminal threw acid into his face in the courtroom, melting half his face. The psychological trauma of the incident turned him into the vicious schizophrenic criminal Two-Face and he became obsessed with duality, using a scarred trick silver dollar to decide upon his victims' fate. Upon being imprisoned in Arkham City, Two-Face took over the Solomon Wayne Courthouse and began using campaign tactics to recruit inmates into his army, while also pursing a vendetta against Catwoman.

Hugo Strange's security force, they're employed to guard Arkham City and keep the inmates in line.