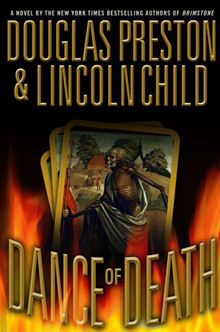 Dance of Death is a novel by Douglas Preston and Lincoln Child first published in 2005. It is part of their informal Agent Pendergast series and the second novel in the Diogenes trilogy. This book also marked the 10th Anniversary of Pendergast's first appearance in The Relic, and as such, featured the return appearances of several characters from past books, including a few that hadn't yet appeared in any Pendergast-related novels from the greater "Preston-Child-verse" such as Eli Glinn from The Ice Limit.
Advertisement:

Aloysius and Diogenes Pendergast have been at odds since they were children. Aloysius was a quiet, brilliant child, while Diogenes was brewing something dark inside of him. Now, Diogenes is planning his "perfect" crime with a simple dare to his brother — "stop me if you can."