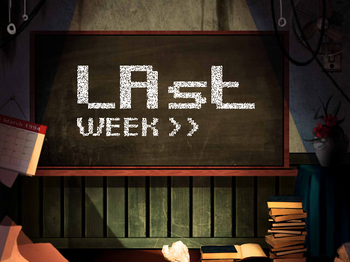 You'll never want an A again...

LAst WEEK is a Thai horror game, created with RPG Maker XP by Mayko Games. It is about a girl named "Napa", who has had a recuring nightmare since childhood. She has decided to visit the ruined school that appears in her dream. But something inside is trying to drag her into the past... and it will never let her go.

This game has a prequel, LAst WEEK: Another Incident, that takes place 10 years before and centers around "Ratri", a student of Vitheesart (A.K.A. the ruined school), who was chosen for a strange ritual of the school. Having forgotten what had happened before, now she is in a strange building that has no exit. Before everything is over she still carries the fading hope to move forward, to seek the path to survive, and to see her friends again...

For the prequel: here

Note that both games are still in the Thai language, though team Whateverzone and their creators are planning to translate them.

LAst WEEK and its prequel provide examples of: