The following characters have appeared in All-New Wolverine:

open/close all folders
Wolverines Past and Present 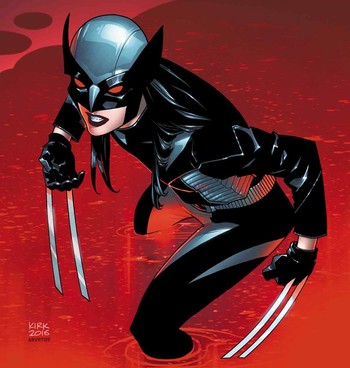 The All-New best at what she does.

For general tropes pertaining to Laura, see her page.

Created by a top-secret project attempting to restart the Weapon X experiments, Laura is the genetic clone of Wolverine created and carried to term by Dr. Sarah Kinney. Tortured, abused, and raised to be the ultimate assassin, Sarah liberated the young X-23 at the cost of her own life, and since then Laura has sought meaning in her life other than being a weapon. Wolverine eventually found her brought her to the X-Men where she began to heal, where he became a father figure and mentor to her, before eventually legally adopting her.

Following Logan's death, Laura took up his mantle to become the Wolverine herself. 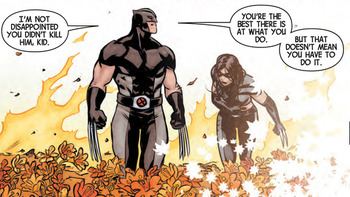 For general tropes pertaining to Logan, see his page.

Laura's "father" and genetic template, it was the Facility's attempts to replicate the Weapon X experiments that led to her creation. At times their relationship was strained or rocky, and Logan freely acknowledged that he was a poor father, but he nonetheless cared immensely for Laura's well-being, and objected to her inclusion on X-Force because he was determined to see her have a chance at a normal life. Following his death she takes up his mantle as Wolverine. 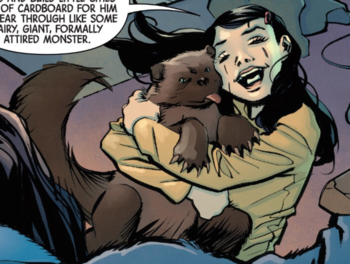 A Girl And Her Angry Mustelid.

An actual wolverine, dropped off at Laura's apartment by Squirrel Girl in issue 7. Gabby immediately adopts him a pet.

An elderly version of Logan from an alternate future, Maria Hill initially contacted him for help investigating the disappearance of Agent Lee and her strike team. It's Logan's own disappearance that prompted her to call in Laura for help. 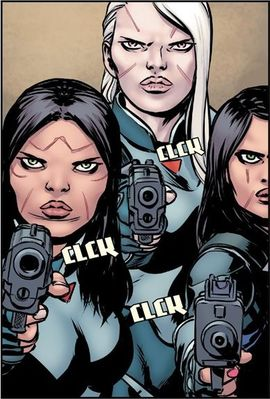 L-R: Zelda, Bellona, and Gabby are about to shoot you.

A group of assassins trained by Alchemax, cloned using Laura's genetic material in an attempt to recreate her. However while they look like her, they were not born with her mutation. She first encounters them in Paris while attempting to protect one of their targets. Originally there were ten girls. Six were killed before their escape, leaving only four: the unnamed sniper Laura encountered in Paris, designated X23_3PAR by Alchemax, and three others; Gabby, Bellona, and Zelda. They were modified by Alchemax to feel no pain, but the process is also slowly killing them. 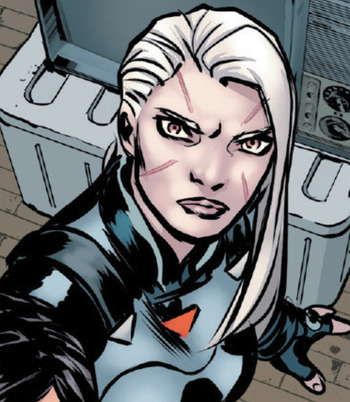 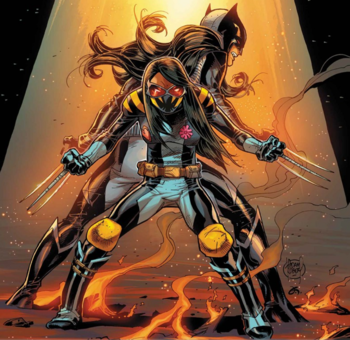 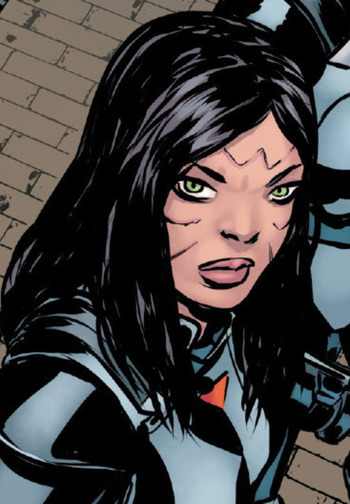 A pirate and one-time target during Laura's days as an assassin, Ash agrees to take Laura and Gabby to Madripoor so they can investigate the water bombers which sprayed Daylesville with trigger scent and kicked the plot in motion.

For general tropes about Daken, see his page

The original Wolverine's son, and Laura's older "brother". A notorious Manipulative Bastard and Sociopath, Laura and Daken have nonetheless forged a surprisingly affectionate sibling relationship. He arrives on Roosevelt Island courtesy of Doctor Strange to help contain the virus ravaging the population. 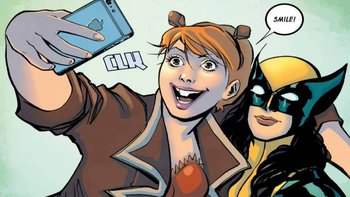 For general tropes about Squirrel Girl, see her page

College student with Squirrel DNA and Marvel's most powerful hero. She comes to Laura asking for help in tracking a squirrel who the latter had inadvertently attached a tracker to while also wrecking its home during a scuffle with Alchemax Genetics.

For general tropes about Gwen, see her page

The Spider-Woman of Earth-65 finds herself crossing paths with Wolverine when she's unceremoniously zapped not only into Laura's apartment, but into Laura's body. The two women must work together to determine who has done this to them and why, and reverse it before their consciousnesses are forcibly returned to their own dimensions and lost forever. 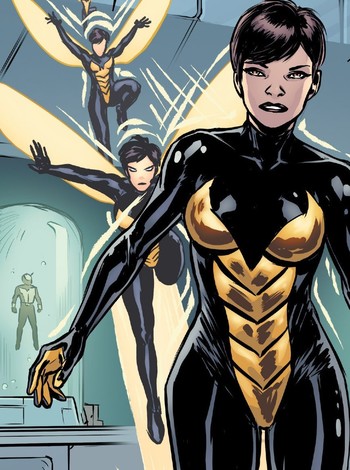 For general tropes about the Wasp, see her page

One of the founding members of the Avengers, Janet van Dyne disappeared after the events of AXIS, when she was kidnapped by Havok as part of his attempt to escape. She resurfaces in All-New Wolverine #5 to assist Laura in her efforts to help the Sisters.

For general tropes about Jean, see her page

Brought from the same time period as Laura's boyfriend, Angel, Jean arrives in Madripoor with Warren and Gambit to help Gabby rescue Laura from Kimura, and break her free of the conditioning that has helped to define her life.

For general tropes about Kate, see her page

Kate is the one and only Hawkeye in the future of "Old Woman Laura." She accompanies Laura on her mission to Latveria, after Gabby tips her off. 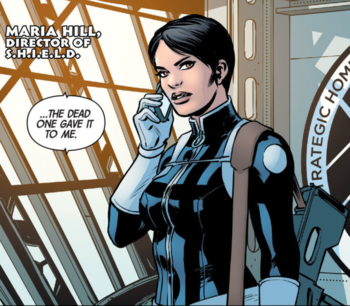 For general tropes about Maria Hill, see her page

The current director of S.H.I.E.L.D.. Laura contacted her with the information needed for them to take care of arresting Chandler and finishing the cleanup of Alchemax Genetics. Maria later approaches Wolverine with a riddle of her own, that she needs her unique abilities to unravel after an arms bust goes...weird.

Laura's long-lost aunt and cousin, whom she was forced to send into hiding to protect them from Kimura.

For general tropes about Gambit, see his page

Laura's friend and older brother figure with the X-Men, Gambit arrives in Madripoor to help rescue her after she's recaptured by Kimura. 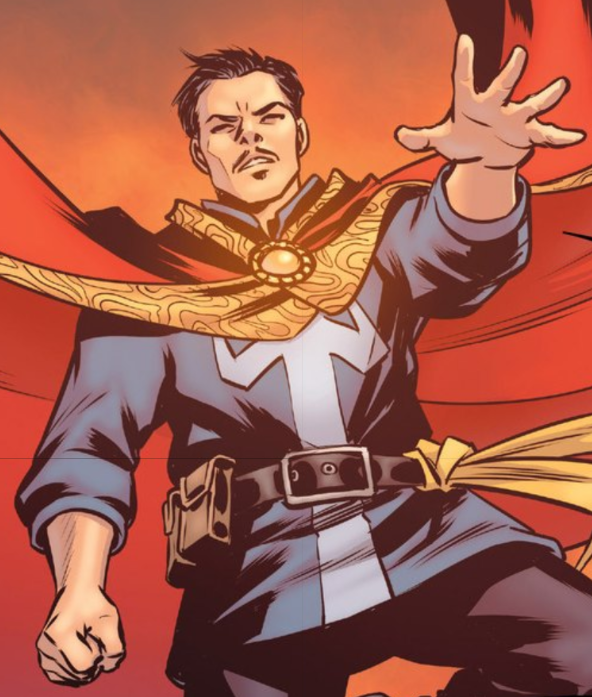 For general tropes about Dr. Strange, see his page

The Sorcerer Supreme of Earth, Stephen Strange is an Avenger and former ally of Logan. Laura turns to him in hopes of curing the Sisters both of their inability to feel pain, and the modifications made by Alchemax that are slowly killing them. 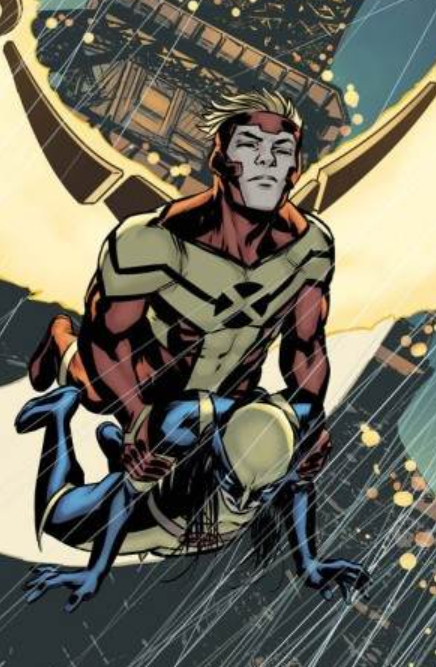 The time-displaced teenage version of the X-Man Angel, Warren was brought forward in time, along with the rest of the Original Five X-Men, by the present-day Beast in an attempt to get through to Cyclops about his actions M-Day. Stranded in the present when Beast was unable to return them home, Warren first meets Laura when he and the rest of the O5 rescue her from the Purifiers in Miami, eventually falling in love with and entering into a relationship with her. He acts as Laura's Sidekick in the All-New Wolverine.

A division of the very same Alchemax founded by Norman Osborn, Alchemax Genetics is under the direction of Robert Chandler. They have succeeded in carrying out the Facility's plans and made several clones of Laura, though the girls lack her mutation. However Chandler secretly has other plans for the project that his bosses are unaware of.

Chief of security at Alchemax. Mooney contacts Laura about stopping the Sisters after she foils their attempt to assassinate the son of Robert Chandler. A very large and imposing figure, he would prefer to handle the matter himself, but acknowledges that Alchemax needs Laura's help. Bellona implies that Mooney was the Sisters' jailer before their escape, and may have had a hand in abusing them. 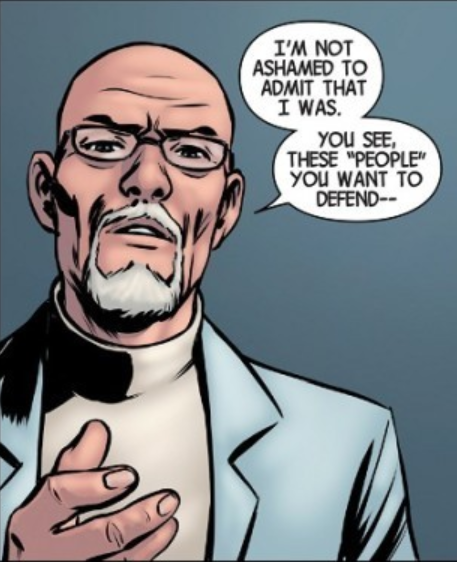 The director of Alchemax, Laura saved his son from assassination. He requests Laura's aid in stopping the Sisters before they can kill anyone else, claiming that they've grown twisted. He may, however, have an ulterior motive.

A mysterious organization with a thirst for vengeance against Logan's family.

The apparent leader of the Orphans of X, or at least the one directing their attacks on Laura and her family. Even more so than the others she has a personal vendetta against Laura herself.

For more about Henry, see the character page here.

The son of Rachel Sutter and (unknown to him) Zander Rice, Henry has joined the Orphans of X for revenge against Wolverine. He serves as a metallurgist, bonding the metal of the Muramasa Blade to bullets to provide them with a weapon against Wolverine, and has also entered into a relationship with Amber.

One of two members of the organization tasked with working on Daken after his capture. He takes a direct hand in torturing him when his partner, Lisa, is unable to continue any more.

Jasmine was a member of the Orphans given only a month to live by her doctor. She was part of the team sent to recover the Muramasa Blade, and died disabling Captain Marvel.

A doctor working with Ira on torturing and breaking Daken. She's the one who hacked off his arm, and the Torture Cellar appears to be in her home. 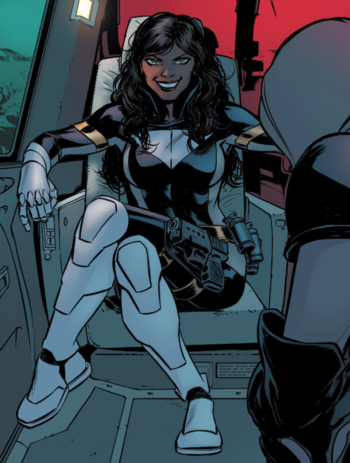 Kimura is a normal human who was modified by the Facility expressly to serve in the capacity of Laura's handler in the even she ever got out of control. A sadistic psychopath, Kimura inflicted severe physical and emotional abuse on her while she was at the Facility, and is obsessed with tracking her down and recovering her. Her body has been granted increased physical density, which makes her virtually indestructible. 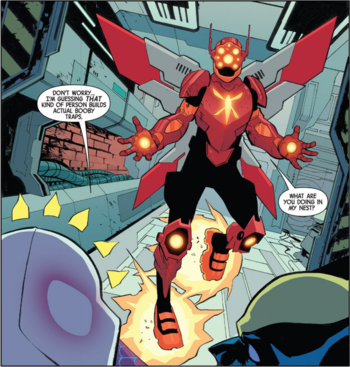 The niece of the Hornet, Eddie McDonough, Melinda targets Wolverine in retaliation for her uncle's death during the original "Enemy of the State" event.

A one-time adversary of Logan who often partnered with Bloodscream, Roughhouse turns up in Madripoor under Kimura's employ when Laura arrives investigating a lead in the Daylesville massacre. 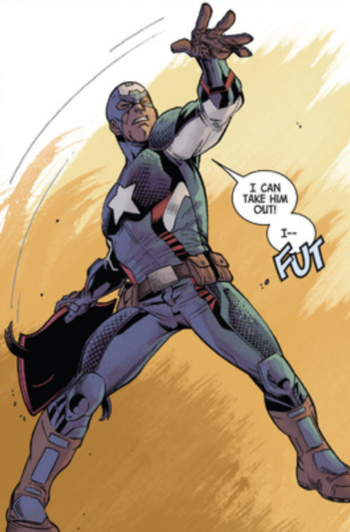 For general tropes about Cap, see his page.

After a prophecy by Ulysses that Old Man Logan would kill Gabby, the legendary Avenger is sent to Laura's apartment to bring him into custody in hopes of preventing tragedy. Instead it brings him into direct conflict with Wolverine over the matter, who refuses to judge or punish someone for something they haven't done. 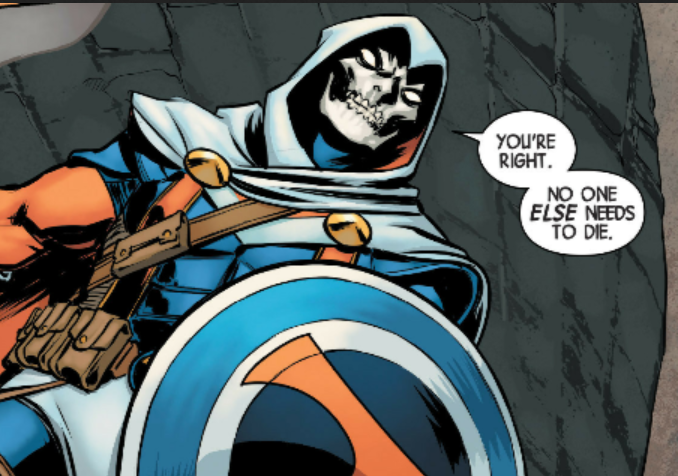 For general tropes about Taskmaster, see his page.

A former S.H.I.E.L.D. operative granted "photographic reflexes," Taskmaster has the ability to mimic the fighting style of anyone he encounters, at the cost of losing his memories whenever he utilizes his powers. He now operates as a mercenary and assassin, and was hired by Alchemax as backup to eliminate the Sisters.

Warning: This character presents a significant spoiler. Read at your own risk. No other spoilers for this character will be marked.

Laura's mother: The Facility scientist who created her, carried her, raised her, and was ultimately killed by her. Her death has long haunted Laura, yet she inexplicably resurfaces alive and seemingly well, possibly giving her a second chance at the family she was denied.