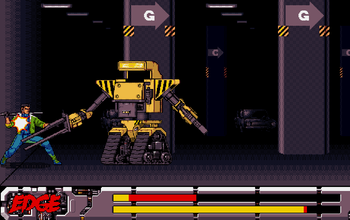 Kikumaru vs. the first boss.
Edge is a side-scrolling Beat 'em Up created in 1993 by Technical Group Laboratory (TGL, creators of Advanced V.G. and Sword Dancer) for the PC-98 computer. This game is one of the only true Beat'em up games on this computer, along with Night Slave.
Advertisement:

Sometime in the 22nd Century, a giant magnetic wave has devastated most of Asia and Europe, the governments have dissolved, chaos and anarchy reigns...until powerful Megacorporations arise to take control of what's left, by restoring most of the affected zones and building Space Stations...and two Megacorporations stood out among the others: the first one, PHATTY, establishes on Hong Kong; and the second, Tenkai, controls Tokyo. PHATTY and Tenkai were being at odds with each other in a regular basis, but when Tenkai stole something very secret from PHATTY, the two were about to go on a full-scale war. With disastrous consequences for the very few good people that is being oppresed.

Enter Kikumaru Sakakibara, a martial artist with proficiency in the staff, who was relaxing in his house when a Femme Fatale named Rim enters and persuades Kikumaru to join her group so they can find the secret that was stolen from PHATTY. With that secret, they should be able to bring the two Megacorporations down at once. So Kikumaru accepts the offer and enters a partnership with Rim to destroy the two corrupt governments.

If you want to play, be warned that this game contains some mild nudity.