Literature / No Safety in Numbers 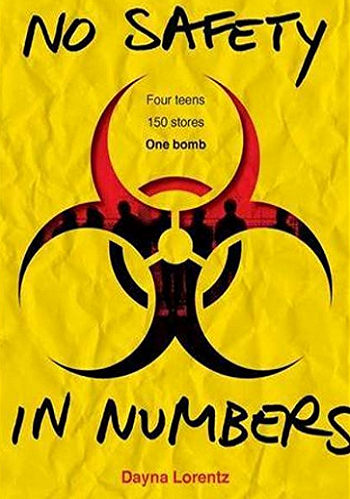 No Safety in Numbers is a young adult novel by Dayna Lorentz published in 2012, the first book in a planned series. On a Saturday afternoon in October, an unknown terrorist releases a biological weapon into the ventilation shafts of the Shops at Stonecliff, a suburban mega-mall in Westchester County, New York. The mall is put under quarantine, trapping thousands of shoppers inside.
Advertisement:

Among those shoppers are four teenagers. Marco Carvajal is a working-class Costa Rican kid who works as a busboy at the Grill-n-Shake. Alexandra "Lexi" Ross is the nerdy, computer-whiz daughter of Senator Dorothy "Dotty" Ross, attending the mall with her parents for Chinese food and a movie. Ryan Murphy (no, not that one) is a Lovable Jock from West Nyack High School, running an errand for his older brother Thad (the star quarterback) and hanging out with his decidedly less lovable teammates Mike and Drew. Shaila "Shay" Dixit is an artsy Indian theater/poetry geek who is out shopping with her grandmother (or "Nani") and her little sister Preeti. For the four of them and everyone else, the fun of having an entire shopping mall to themselves soon gives way to food shortages, fights, agitation, gang violence, rioting, and disgusting bathrooms. And the four of them are among the only ones who know the truth about what is happening...