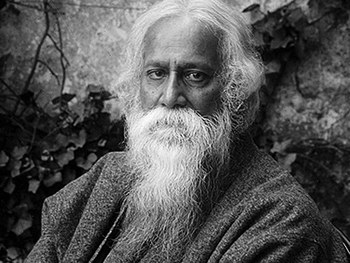 Rabindranath Tagore (7 May 1861 - 7 August 1941) was a Bengali poet, novelist, dramatist, musician, and painter. Although largely unknown outside of India, he is considered one of the most important Bengali artists.

Tagore was born into a rich artistic family. Tagore began writing poems at the age of 8, and at the age of 16, he wrote a group of poems that, as a joke, he claimed were long lost 17th century classics. Literary experts declared them to be authentic.

Eventually, Tagore began travelling to other countries, and, on a visit to England, he met W. B. Yeats, who would help to popularize Tagore's work in the west. This eventually brought him to the attention of the Nobel Prize Committee, who, in 1913, awarded him the Nobel Prize in Literature, making him the first non-European to win the prize.