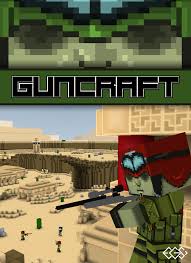 Guncraft is an online Voxel-based First-Person Shooter, created by exacto games for PC in 2013. It was funded

on Kickstarter with the promise of combining the creative potential and destructibility of Minecraft with the tense, competitive gameplay of online shooters. Whether it succeeded at those goals is a matter of debate.
Advertisement: