Video Game / I Am Still Alive 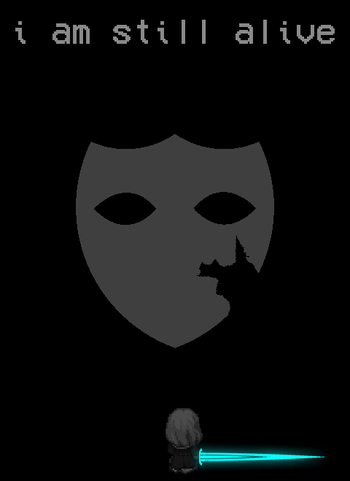 "It's truly astounding how different everything can become once you let your guard down."
I Am Still Alive is an RPG Maker game developed by MollyAvast, and released in episodes (or "acts") from September 29, 2018 to August 22nd, 2019. The full game can be freely downloaded on its IndieDB

The game is divided up into seven acts. Each act follows a different character, but all of them contribute to the same overall story. The first act places you in a bizarre world that your player character, Emily, is forced to navigate. The rest of them show how the world ended up in this sorry state.

There are also "Intermission" videos released between acts, although each one is typically tied strongly to the most recently released act. Only one is currently released, taking place betweeen acts one and two. Intermissions can be viewed on MollyAvast's YouTube channel

Has no relation to the 2012 Ubisoft game I Am Alive.

I Am Still Alive contains examples of:

open/close all folders
Act One: Desperation
Act Two: When the Smoke Clears
Cinder: I never told him how much I appreciated his loyalty. I never told him...a lot of things, I guess.
Wendel: [surprised] ...ah.
Act Three: The Gilded Prince