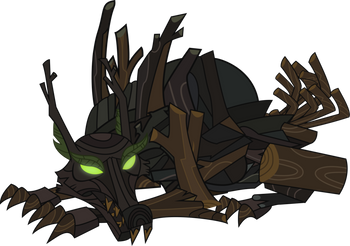 Jack's Puppet
"I think, therefore I am."
Advertisement:

is a My Little Pony: Friendship Is Magic Fan Fiction by wille179. It is the story of Lumber Jack, a timberwolf who gains the intelligence of a human to become something more.

It shares continuity with Split Second, while the human's soul comes from the dying universe of Black Queen, Red King, as the author writes all his stories in a Shared Multiverse.