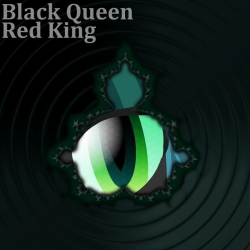 Chrysalis: the first of the Gatekeepers.
"Three weeks ago, it started with a dream."
— William
Advertisement:

is a My Little Pony: Friendship Is Magic fan fiction story by wille179

note  who is also a troper.

Black Queen, Red King stars a teenage boy named William who forms a psychic connection with Queen Chrysalis. The story is set on a version of Earth set in the year 2029 and during the middle of season two of My Little Pony.

Eventually, Williamnote  who changes his name to Alvarium Rex after metamorphosis into a royal changeling capable of transporting matter and opening portals to Chrysalis's universe.

The thing is, he's not the only human to start pairing up with creatures in the other world, and not every human is as interested as he is at upholding the masquerade. And then there's Oblivion...note  who is more of a multiverse-scale Spacetime Eater.

It follows the adventures of Victor DiVinci, who may or may not be Clairvoyant, and his partner, King Sombra.

Several other authors are writing additional side stories featuring other Characters within the same 'verse.

I'm Having Soul Pains: John Smith suffers from this right before his soul is crushed to death and consumed by Rex.