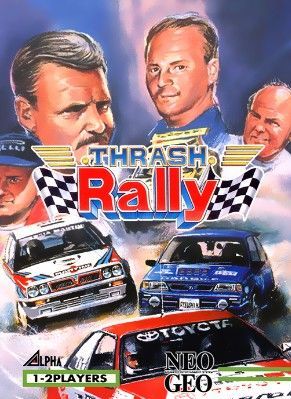 Thrash Rally is a racing game developed by ADK for the Neo Geo back in 1991.

The game is played from an overview perspective, with the camera centered at all times on your car, and features two modes: a World Rally Championship, with a total of five stages that correspond to Real Life rallies celebrated in the World Rally Championship and allows you to choose between six cars, er, based on real-life racing ones that differ on their acceleration, tires, handling, and endurance, and a Paris - The Cape, that attempts to imitate the real-world Paris-Cape Town Rally

, celebrated back in 1992. This one features three extra vehicles apart from the six available in the WRC mode.