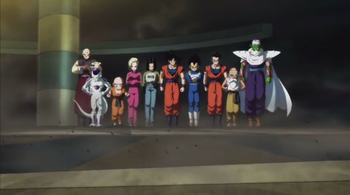 "I'll go beyond the Limit Break! The universe is mine to take!"
"I have no fear! I think it's clear!
Let's kick it up into high gear!
This is Dragon Ball Super! We've got the skills to blow Zeno away!"
—Limit Break X Survivor, second opening (full version)
See also:
Advertisement:
open/close all folders
Battle of Gods Saga
Episode 1