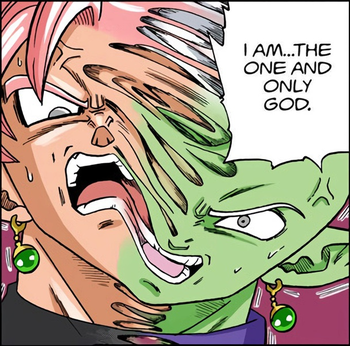 Be not fooled: this is NOT the carefree world of Dragon Ball or even the darkly awesome one of Z. Dragon Ball Super is more of a Cosmic Horror Story than any Shounen series has any right to be, and thoroughly deserves its Nightmare Fuel page. One may argue that the violence has been toned down from its predecessors, but the existential horror of a multiverse filled with capricious, unstoppable deities more than picks up the slack...
Advertisement:

For the original series, see here, for the previous series, see here. The Future Trunks Saga and Universe Survival Saga have their own pages here and here, respectively. For the film Dragon Ball Super: Broly, see here.