Fanfic / What If Gine Went With Goku to Earth? 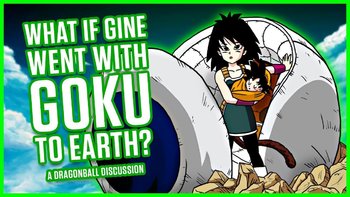 "I guess you could call this a… a family vacation?"
—MasakoX
Advertisement:

What If Gine Went With Goku to Earth? is a Dragon Ball What If? fanfic by Lawrence Simpson a.k.a. MasakoX of Team Four Star fame as part of his Dragon Ball Discussion series of YouTube videos. This particular topic started on Mar 19, 2018 in response to the invention of Gine, Goku's mother, for Dragon Ball Minus.

As the title suggests, he explores his interpretation of an alternate version of the story where Gine is accidentally sent off to Earth with her baby boy Kakarot and is taken in by Grandpa Gohan, and seeing how the events would continue to play out through the incoming threats of the series. It is now complete with 18 parts. The story has gone from the destruction of Planet Vegeta in the Bardock Prequel all the way up to the end of Z.

for the story itself and here

for Masako's reading of it.

What If Gine Went With Goku to Earth? has the following tropes: