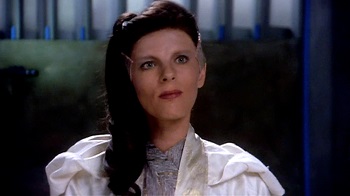 Weep for the future...weep for us all. I have looked into the darkness...you cannot do that and ever be quite the same again.
—Ambassador G'Kar

The Advisory Council is in session, with Londo ranting about the behavior of two of its members, G'Kar, who is still missing, and Delenn...

He moves that they reprimand their governments and demand they send new representatives, but no one seconds. With the motion falling flat, Sheridan calls to adjourn. Before he leaves, Londo stops Na'Toth and asks if she knows where G'Kar is.

G'Kar is currently in a lot of trouble as he and a small squadron of fighters race toward a jumpgate with several black, spikey fighters in pursuit. His wingmen are all destroyed, but they allow G'Kar to escape. He makes it to the jumpgate and sets course for Babylon 5.

Franklin comes looking for Sheridan. He wants permission to perform an unusual procedure using the alien device he acquired last year in an attempt to bring Mr. Garibaldi out of his coma. Sheridan gives his permission, then goes to meet his sister, Lizzie, who is coming for a visit.

Londo has met up with Mr. Morden again, looking for assurance the attack on Quadrant 37 cannot be traced to him. Morden assures him he's safe. Londo then asks what if he need another demonstration. Morden replies he has only to pick a target, any target. Londo laughs and mockingly suggests the Narn homeworld. Morden replies quite seriously, "One thing at a time, Ambassador." Londo looks a little disturbed. Before leaving, Morden asks a favor; if Londo should hear anything, no matter how insignificant, to let him know.

Sheridan and Lizzie are at dinner reminiscing. The conversation turns to Sheridan's late wife, Anna, who he still misses. She wants him to move on, but he thinks he needs more time. Afterdinner, Sheridan shows up in Medlab where Franklin is about to strap himself into the device. He tells the doctor to plug him in instead, saying there should be two of them, one in the machine, the other operating, otherwise it might accidentally kill them.

Na'Toth enters G'Kar's quarters and hears his voice tell her to close the door. She finds him sitting on his bed. He solemnly tells her to "weep for the future... weep for us all." He then explains why he went missing and what he found in his travels. After reading ancient texts and searching many worlds he found something on a dark deserted world where nothing should be. He tells her they must warn the others.

The machine works and Garibaldi suddenly wakes up, and Franklin calls Sheridan and Ivanova down. Garibaldi asks if they were able to save the president, and is disappointed to learn they didn't, and even more so to find out that Sinclair is gone. Sheridan introduces himself, but Garibaldi doesn't know him yet. When asked if knows who shot him, he thinks back but can't remember anything.

Londo runs into G'Kar in the corridor and asks if he found anything. G'Kar says he has and intends to tell the council. He then speaks problems between their worlds and says they can only be resolved with Centauri blood, but for now there is a greater threat, one which is a danger to everyone.

Lennier walks into Delenn's quarters to find the chrysalis open and a figure wrapped in a robe writhing on the bed, asking for help. He summons Dr. Franklin and brings him there.

Sheridan is with Lizzie in his quarters talking about the station and life there. Their talk turns once again to Anna, and Lizzie begins to get annoyed with him for bringing it up. He blames himself for her going on the expedition that killed her. They had had a vacation planned, but he got called to duty and she decided to go. He thought he'd make it up to her, but never got the chance.

While examining Delenn, Franklin sees part of the scaly looking substance on her arm and it crumbles away. She looks up at him, her face unrecognizable, and asks, "What am I?"

In the council chambers G'Kar is describing the ancient race he found reference to and how he believes they have returned. He has tracked them to a dark world called Z'Ha'Dum, and has persuaded his government to send a ship to investigate. They will jump out of hyperspace and recon the planet before leaving. No one will ever realize they were there. Londo meets with Morden and tells him about the expedition. Morden says he's only heard of the place in passing, but asks when the Narn ship is to arrive.

Talia comes to Medlab to see if she can help Garibaldi sort out his memories. She takes his hand and together they relive the attack. She reacts in shock but Garibaldi sees a reflective surface with the shooter's face in it.

A short time later, his aide, Jack, is sitting in an office when another officer comes in and tells him to come out and see Delenn's new wings. Curious, Jack begins to follow, and is ambushed by several other officers outside. They want to work him over but Sheridan arrives and orders him taken to a holding cell, under maximum security.

While there Garibaldi, despite Franklin's objections, comes to see him. He recounts their time together, how he treated him like a little brother, then demands to know why. Jack tells him there's a new order coming, and he's on the side that's going to win. Garibaldi asks if it's Homeguard, but Jack laughs and calls Homeguard a bunch of amateurs. Garibaldi then tells him the penalty for treason is spacing.

They put you in an airlock, seal it, then open the space doors. You spend the next five minutes chewing vacuum until your lungs turn inside-out, your eyes freeze and your heart explodes; it's the worst kind of death you can imagine. And when that day comes, I'll be there to push the button.

As Garibaldi leaves, Jack calls to him, gives him a little salute, and says, "Be seeing you."

Sheridan is in his office when he gets a call from President Clark. The president orders him to ship Jack back to Earth. While there is no evidence connecting him to the destruction of Earth Force One, he has shot a superior officer. Clark tells Sheridan he wants the matter handled properly, so he also requests all other information regarding the case.

A Narn cruiser is in hyperspace about to jump out over Z'Ha'Dum, but waiting for them is another of the black spider-ships. It fires as soon as the ship appears through the jump point, quickly cutting it in half. Back on Babylon 5, Na'Toth informs G'Kar that contact has been lost and the ship has been presumed destroyed, probably in an accident. G'Kar is not so sure. He explains that there is a brief moment while the ship is jumping that it is vulnerable to attack, but to do that one would have to know exactly when and where the ship was coming. But no one knew that except... he trails off, looking over the others there. His eyes settle on Mollari....

Sheridan asks what he's getting at. G'Kar looks away and says, "Nothing. I am too late. Everything is too late."

Lennier comes in and announces that Ambassador Delenn has returned and would like to take her place once again. Sheridan agrees, and Delenn, wearing a white hooded robe, comes in. As she removes the hood, long brown hair falls around her shoulders. She explains that she has undertaken this change to become a bridge of understanding between humans and Minbari.

Later, Sheridan tells Lizzie, about it. She asks if it's just physical or a genetic change, but he doesn't know. She's about to leave the station, but she has something she wants him to see and hands him a data crystal. He puts it on, and a recording of Anna plays in which she says she had already made arrangements to go on that expedition, and was relieved she wouldn't have to disappoint John by cancelling their plans. Sheridan finally lets go, as he tells the recording, "I love you, Anna."

In Medlab, Garibaldi thanks Talia for helping him out, and then begins to talk about some theories he has. He notes the salute Jack gave him was the same as the one Bester gave before he left, and wonders if the Psi Corps might be involved in some way. He also notes that Clark got a rather convenient flu right before Earth Force One exploded.

Sheridan and Lizzie say their goodbyes and she heads off to her ship. As she leaves, he gets a call from C&C. Ivanova had a hunch and ran a check on the ship transporting Jack. It met with another ship that had all the right clearances, but didn't appear on any registers. They both realize that Jack, and the evidence, is gone.

Sheridan: It gets cold up here sometimes, doesn't it, Lieutenant Commander?
Ivanova: Yes, sir. It does indeed.