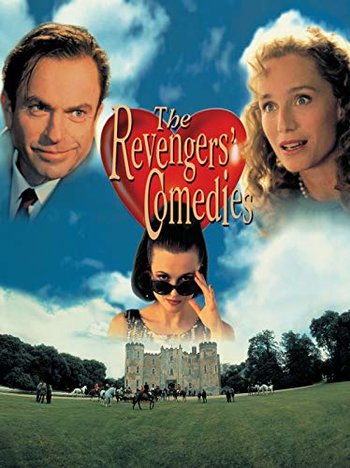 The Revengers' Comedies is a 1998 British comedy film written and directed by Malcolm Mowbray. The screenplay is based on a play of the same name by Alan Ayckbourn.

Henry Bell (Sam Neill) and Karen Knightly (Helena Bonham Carter) meet when both intent on committing suicide by leaping from the Tower Bridge in London. They explain to each other their reasons to do so: Henry has been eased out of his job by condescending Bruce Tick (Steve Coogan), while Karen has been abandoned by her lover, who opted to return to his wife, Imogen Staxton-Billing (Kristin Scott Thomas). When neither succeeds in their suicide attempt, Henry and Karen they strike a bargain whereby each agrees to exact revenge on behalf of the other.

However, Henry is less enthusiastic about the plan, and finds it difficult once he meets Imogen, as he falls in love with her and they begin an affair. There's just one problem: Karen has already kept his end of the bargain, and when she demands Henry to do the same, he begins to suspect Karen is more of a villain than a victim, and the woman proves to be a formidable foe when she realizes Henry may renege on their deal.