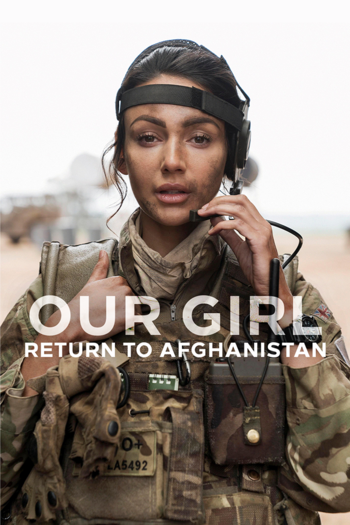 Our Girl is a British military drama about female medics in the British Army, created and primarily written by Tony Grounds, starring first Lacey Turner and later Michelle Keegan as the protagonist.

The Pilot and Series One centre around Molly Dawes (Lacey Turner), a Combat Medical Technician fighting to prove herself in Afghanistan, despite the presence of ex-flame Dylan "Smurf" Smith (Iwan Rheon) and the doubts of her commanding officer, Captain James (Ben Aldridge), who criticises her compassion towards the locals.

Series Two introduces Georgie Lane (Michelle Keegan), a CMT who joins 2 Section for a humanitarian mission to Kenya and finds herself working with ex-fiancé Capt. Elvis Harte (Luke Pasqualino) as they combat a local terrorist organisation.

Series Three has Lane and 2 Section travelling to Nepal and Nigeria, before finding themselves under the command of brutal ex-SAS captain "Bones" McClyde (Olly Rix) for a final tour in Bangladesh to assist a refugee outreach project.

Series 4 sees new recruits join 2 Section, now led by 2nd Lieutenant Hurst (Will Attenborough), before returning to Afghanistan for a training-and-security mission, where they discover a local political candidate being targeted by Aatan Omar — the antagonist of Season 3, Part 1 — who is still at large.

Our Girl was first broadcast on March 24th 2013 on BBC One. On January 13th 2020, Keegan announced she would quit her role as Lane after the fourth (and current) series, although it is as of yet unknown whether the show will continue for a fifth series.

A word about the title: some sections of the British press describe soldiers as Our Boys, so a woman in the army would be Our Girl.

Our Girl provides examples of: