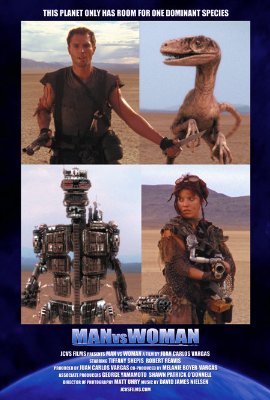 The Man, Woman, Robot, and Dinosaur With No Name
Advertisement:

A 2006 almost entirely dialog-free science fiction short film from Juan Carlos Vargas, who wrote it, directed it, and created the lion's share of the FX.

On a meteorite-battered desert planet, a man (Robert Reavis), a woman (Tiffany Shepis), a robot, and a velociraptor square off over a tiny pocket of water. It Makes Sense in Context.