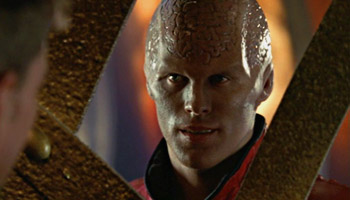 Pilot informs everyone that Moya is being tracked by a weird ball of energy. (It’s always something.) The thingy enters the ship without permission and proceeds to float around, examining everyone in turn. When it reaches Crichton, its interest is suddenly piqued, and it hovers above his head. At Crichton's invitation, Aeryn shoots it, but it grows and envelopes Crichton. The remaining crew members converge on the hangar to investigate. The sphere vibrates and spits Crichton back out, way traumatized, along with a hairy beast of some sort, which quickly gallops away. Crichton can't remember what happened while he was inside the ball, while Zhaan finds some blood left from the beast on the floor. If it bleeds, we can kill it!
Advertisement:

Zhaan conducts a lab analysis on the blood while D'Argo goes hunting, telling Chiana to stay put. Chiana holes herself up in Crichton's quarters, where she finds herself cornered by the beast man, who inexplicably growls her name. Bad advice, D'Argo be thy name. The creature lopes over to Johns belongings, where he grabs Johns IASA ID tags and clumsily taps at them. Chiana screams and tries to make a run for it, but the creature pins her down and gestures frantically as Crichton's old flight suit. He convinces her that he is Crichton.

The real Crichton is less convinced. Chiana leads the visitor to the hangar to meet everyone, but Crichton quickly gets in the neanderthal's face, causing Caveman Crichton (or "Neandro") to go berserk and necessitating Zhaan to sedate him. Just as they've determined that Neandro shares the same blood as Crichton, the green sphere starts acting up again, and out pops another Crichton, this time a more-evolved "future" version with a super-brain.

The crew locks Future John ("Futuro") in a cell, and the real Crichton quizzes him. Futuro mentions that Crichton is the template - the original - and explains that he is a copy, with all his memories intact. The sphere starts fluctuating, and now it's creating an inter-dimensional portal that is threatening to tear Moya inside-out.

Neandro wakes in a cell, with Chiana by his side. Futuro tags along with Aeryn to have a look; Futuro is bemused by his monosyllabic counterpart, but says that they won't learn anything here. The sphere begins to talk in a distinct voice, but in a frequency that only the Crichtons can hear. Aeryn's pistol blast damaged the vessel, and it needs to collect one of the "samples" before it can return to its dimension. If it doesn't get one, it will absorb all living matter within its radius. Unluckily, Moya falls under that category.

Crichton realizes that the sphere must have chosen him because it's never collected data from a human. Futuro says that the answer is to return the "most expendable" sample (Neandro), but Crichton firmly says no. Rygel concurs with Futuro, natch. Chiana suggests another candidate, the "guy with the big head." Pilot communicates that Moya would never expect an innocent being to die, and will understand if Crichton leaves the ship to its fate. Mind you, Pilot is not okay with that at all. The defense screen is failing, and stress fractures are appearing throughout Moya.

Futuro tells Cricthon that it's time and offers to "take care of it." Crichton asks how he can be so calm, but he says that he is prepared to do what has to be done, and tells Crichton not to feel bad. D'Argo goes with Crichton, but Chiana has hidden beast John away; she set him free. Chiana chews Crichton out, saying that she saw in Neandro all of the aspects that she loves in Crichton. Taking her words to heart, Crichton finds Neandro holed up in a ceiling panel (exactly where Crichton would go if he needed to hide), then releases him.

With Neandro running loose, Futuro tells Aeryn that they should re-assess the plan, and that it would make sense to get rid of Crichton. Aeryn tells him to suck it, so Futuro clocks her out and steals her gun. Crichton joins him in the maintenance bay, and Futuro says that he knew Crichton would let the beast go, since he views Crichton as being equally low on the evolutionary table. Futuro plans on feeding Crichton to the sphere, saying that with Crichton around, he would always be an outsider. Crichton tosses aside his pistol, unwilling to save his life at another's expense. If Futuro is the future, Crichton is is glad he won't be here to see it. Futuro watches dispassionately as John approaches the sphere; Just as he's about to make contact with it, Neandro leaps out of the shadows and brains Futuro with a metal pipe. Futuro goes down like a sack of wheat germ, and Neandro grunts with satisfaction and hoists Futuro's body over his shoulders. When Crichton intervenes, Neandro says that Moya is not his place, and that he accepts his fate. Crichton says that he understands, and Neandro carries his counterpart into the sphere, which vanishes along with both copies of Crichton.

In the aftermath, D'Argo comforts Crichton, saying that Futuro was only one possible genetic path. Chiana's glad it worked out the way it did, and Crichton says he wishes he could be.