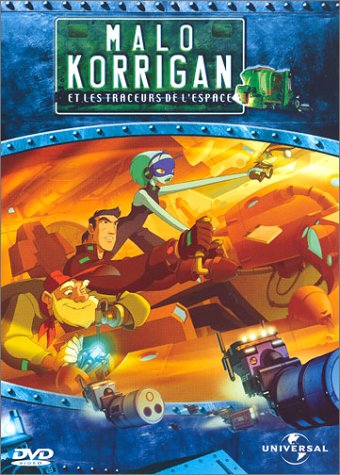 Malo Korrigan (full English title Malo Korrigan and the Space Tracersnote "Traceurs" means "Truckers" more than "Tracers" in French., French title Malo Korrigan et les Traceurs de L'Espace) is a French animated television series with 26 episodes, created by Arthur Qwak and Norman J. LeBlanc of Futurikon. It is a Futurikon - Tooncan - M6 Métropole Télévision - Canal J co-production and distributed by M6 Métropole Télévision. The theme song is an original song composed for the TV series by Deep Forest. It was first aired in France during 1999; and later aired in the UK, Canada, Spain and on SABC1 in South Africa.

After a centuries long intergalactic war, peace finally reigns in the universe. More than 200 planets have joined together to form the Cosmocratic League with the aims of maintaining the peace and promoting the economic development of space. Interplanetary transport has become a vital service in maintaining the stability and unity of the League, with vast profits being made by some companies such as the powerful and ruthless Krill-Fireng Consortium. Only a handful of independents remain, rebellious and valuing their freedom, facing many dangers to deliver their cargo in record times. They are the Tracers (Truckers), and the most famous of them all is Malo Korrigan and his crew aboard their ship, the Starduke.

The Spiritual Licensee of Free Lancer.