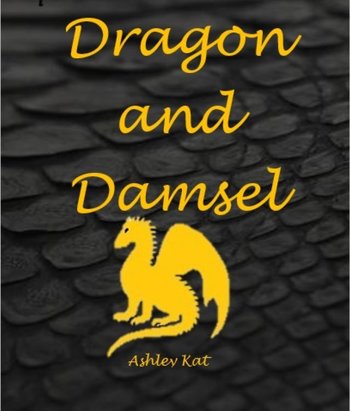 Dragon and Damsel is a paranormal teen romance novel, featuring a budding romance between a dragon and a human. It was published as an eBook in July of 2020 by Ashley Kat, and can be found here: Dragon and Damsel

Bernadette Blaumeer is a young woman living in the small, rainy town of Edmonton. Her days seem to blend together: working, reading, and getting nagged about why she isn't making any art anymore.

But one day, her younger sister Celia goes missing, and she has to travel to the “haunted” castle nearby and bring her back. But once they make it home, the occupant of the castle—a real, living dragon—reveals that he followed them, and that Celia has taken something from him. Bernadette agrees to take Celia’s punishment and travels with the dragon back to the castle. Though she's now imprisoned in the old castle, could she perhaps find happiness here...and maybe even romance?