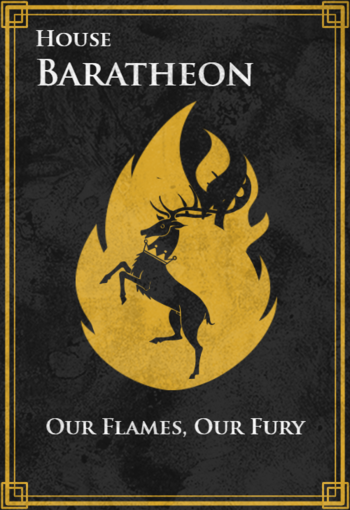 Fury and Flame is a crossover between Avatar: The Last Airbender and George R.R. Martin's A Song of Ice and Fire/Game of Thrones written by JMIII.

At an undetermined point during Avatar's second season, Princess Azula and her entourage find themselves suddenly and inexplicably transported to Westeros in the middle of Robert Baratheon's rebellion against the Mad King Aerys. After single-handedly lifting the siege of Storm's End, she enters a political marriage to Stannis Baratheon in order to protect her crew and obtain a seat at the table of Westerosi politics. As the years leading to the beginning of A Game of Thrones go by, Azula continues to make a name for herself while playing the long game in her rise from Lady of Dragonstone to ruler of the Seven Kingdoms.

The first book A Game of Thrones can be found on fanfiction.net

and on Spacebattles Forum

The second book A Clash of Kings can be found on Fanfiction.net