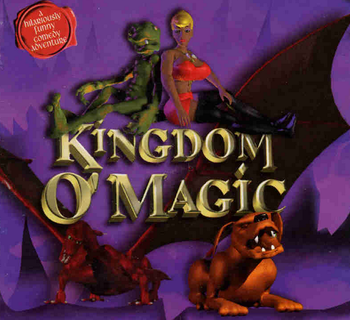 Kingdom O' Magic is a Point-and-Click Game released by SCi in 1996. It is a comedic Adventure Game, filled with bizarre humour, as seen in the instruction manual: "First published in 1876 under the title '101 fun things To Do with Trolls'. However the version on CD-ROM is specially calibrated for short people with red hair".
Advertisement:

The game is largely a parody of J. R. R. Tolkien's Middle-earth, and was designed by Fergus McNeill (known for games such as The Town with No Name and Psycho Killer).