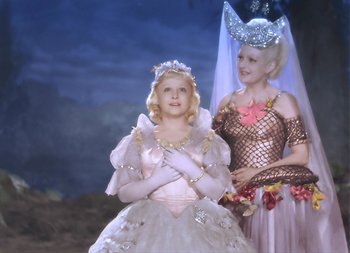 Zolushka and the F.G.
Advertisement:

It is on the whole a highly faithful adaptation of the "Cinderella" fairy tale as it originally appeared in the works of Charles Perrault. Cinderella, or rather Zolushka in this version, is suffering under an evil stepmother and two bitchy stepsisters who make her dress in rags and do scullery work. Her father, still alive in this version, is a spineless weakling who allows his wife to dominate him and persecute his daughter.

This state of affairs is upended when the king proclaims a dress ball. Cinderella's father, the royal forester, gets to go, as do the stepmother and her daughters Anna and Marianna. Cinderella of course does not get to go, her stepmother cruelly loading her up with chores to make sure she doesn't have time even to look at the ball from afar. Cue the fairy godmother, who works some magic with mice and pumpkins...