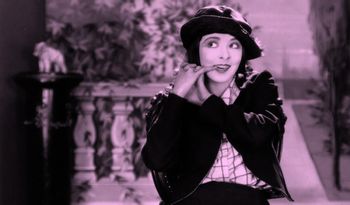 Ella Cinders is a 51-minute long comedy film from 1926, directed by Alfred E. Green, starring Colleen Moore. It is a modern-day reimagining of the Cinderella story based on the comic strip of the same name.

Ella Cinders is a young woman who lives in the small town of Roseville somewhere in Flyover Country. She is treated as a domestic slave by her stepmother, Ma Cinders, and her step-sisters Lotta and Prissy. The only person that ever bothers to be nice to her is Waite Lifter, the ice man. One day flyers pop up announcing that the Gem Film Corporation is holding a beauty contest to find their next movie star. Ella manages to escape the clutches of her stepmother and show up at the "Movie Contest Ball". She wins the contest, only to find out upon arrival in Hollywood that the contest was a scam and there is no film contract awaiting her. Ella won't quit, though—and neither will Waite, who wants to marry her, and has a secret of his own.