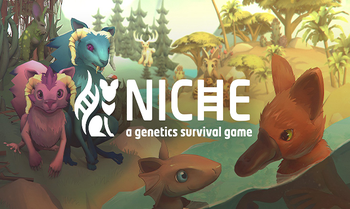 Niche is a self-described "genetics survival game", developed by Stray Fawn Studio (formerly team Niche). It spent some time in Steam Early Access, before getting a full release in 2016. A mobile version is currently in development.

There, you start with two nichelings under your control, and use them to gather food, breed and explore the island you're on. Occasionally, you may run into predators. The real fun of the game, of course, is its breeding mechanics. Every nicheling has a set of genes, and you have to look at the recessive and dominant traits to figure out which two nichelings have the greatest likelihood of creating good offspring.

Unlike some games, there is no stopping the incest. To continue the game, you have to breed what you can get, and while you can meet friendly nichelings in the grass to avoid incest early in the game, the likelihood of meeting wanderers drops as time passes.