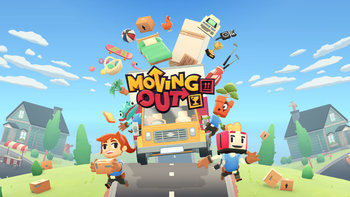 Smooth Moves: Chucking Things Out the Window Since 1982!
Moving Out is a physics-based puzzle game developed by Team17 that brings a whole new meaning to the term "couch co-op". Released on April 28, 2020 for Steam, Nintendo Switch, Playstation 4, and Xbox One the game has you take on the roll of one to four new employees of Smooth Moves to become Furniture Arrangement & Relocation Technicians and help the residents of the town of Packmore...move out! The players can use whatever moves are needed to help pack objects even if it means breaking the rules and making a mess.

We're packing and moving out these Tropes!: