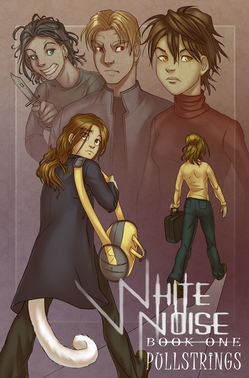 is a post-apocalyptic sci-fi webcomic by Melinda Timpone, aka madsniper. It follows the story of Wren, a genetically engineered experiment. Following an attack on his colony, Wren must leave the underground Deadlands and venture out into the world, seeking the truth of his origins. Although, with mysterious forces after him and those who would kill him for being a Deadlander, he may have enough of a challenge just surviving.

White Noise updates on Mondays and has full-color art. After a two-year hiatus starting in February 2018, the comic returned to updating at the end of July 2020. It's worth a look for fans of the superhero, sci-fi, or post-apocalyptic genres.

Now has a character sheet which could use some love.