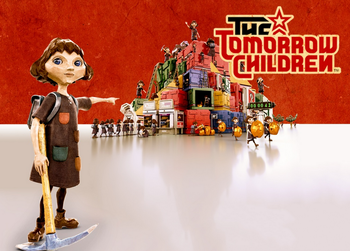 Prepare to work your butt off.

Imagine if a Minecraft server went so horribly wrong that the U.S.S.R. was forced to come in and instil the virtues of communism into the vigilant masses in order to restore the world. Great.

Now imagine if you can't dig into the ground to hide because it's quicksand 2.0, and hiding in the darkness starves you to death while the monsters thrive in light and dark. And speaking of monsters, every monster is ten times your size at minimum. And resources are always low because all of your hard work is constantly being stolen by the less patriotic citizens. And a few corrupt officials.

Sound good? Then you are ready to help Mother Russia!

Set in an alternate timeline, the U.S.S.R. launched a brainwashing project that would access the collective unconscious and allow the most equal of all Communist officials to transcend to a higher plane of existence, and rule the world under glorious communist idealism. Unfortunately, it turns out that humans have more Reality Warper powers than expected; the entire planet has been transformed into a white sphere, where food, building supplies, and most of humanity are locked inside strange landscapes that occasionally materialize for a few days, then evaporate into dust.

You play as a Projection Clone, a little girl whose body is dependent on the sun to survive and can respawn at any nearby Communist-approved town. Your tasks are twofold: harvest supplies in the procedurally generated landscapes, and serve your town by building the necessary structures needed to survive. Daily schedule is usually as follows: go to a landscape, mine the fuck out of it, head back, desperately try to build something with what little resources you have, defend the town, rinse and repeat.

The game was released for PlayStation 4 in 2016 by Q-Games, available for only a year before being shut down in 2017. After regaining ownership of the title from Sony in 2021, an Updated Re-release was announced by Q-Games, along with development logs through the web series Postcards from the Void. The re-release, now titled Pheonix Edition, is set for release in 2022.