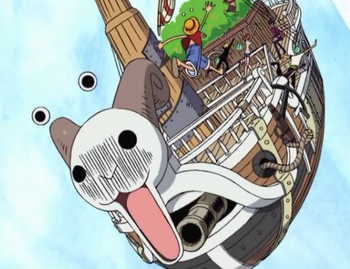 "Everyone be careful! You're going to start falling soon!" note Just as the crew realize they're about to take a 7,000-meter plunge!
Advertisement:

One Piece may be a World of Badass, but it's also a very weird world, full of colorful and insane characters and situations. As such, there's many Funny Moments per arc. Just take a look. As there are a lot, here are pages for each half of the story: