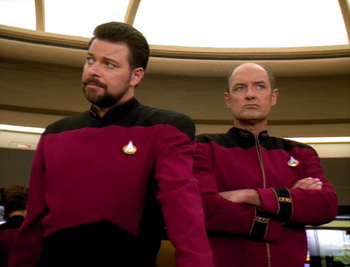 Riker doesn't look so pleased to see his first captain again. Granted, he is an admiral now, and admirals in Starfleet don't have the best track record.
Advertisement:

It's that time of year again, the holiday that brings joy to all the peoples of the ship: "Captain Picard Day." Naturally, he's uncomfortable being seen as a larger-than-life figure by the children - he even gets some ribbing from Riker over it - but he must continue the tradition and select a winner of the various drawings and sculptures of him. Thankfully, the day is interrupted by Vice Admiral Blackwell from Starfleet, who immediately reassigns the Enterprise, and informs Picard that they'll be taking on a passenger from Starfleet Intelligence. It turns out the passenger is Admiral Erik Pressman, who so happened to have been Commander Riker's captain on his first assignment out of the Academy: USS Pegasus. And as it also turns out, the Pegasus is the reason they're out here. The Romulans have found her.

Riker recalls his first assignment on USS Pegasus. There was a warp core breach, and the ship was presumed destroyed. Only nine members of the crew escaped. Recently, however, a Starfleet Intelligence operative in the Romulan High Command intercepted a transmission indicating that a warbird found a piece of the Pegasus and was then ordered to find the rest of it. Since the ship was a testbed for new and experimental systems, some of which were used in building the Enterprise, Starfleet cannot allow the ship to fall into their hands. They arrive at an asteroid field and are immediately greeted by the Romulan warbird. Picard and the Romulan captain share a tense conversation in which they trade Stealth Insults and pretend to be conducting innocent research.

Riker and Pressman share a drink in Ten Forward. Their enigmatic conversation references an experiment that might still be salvageable on the Pegasus, but Pressman orders Riker not to discuss it with anyone, even Picard. Obviously, this makes Riker uneasy. We later see Pressman having some tea with the Captain, who recounts how he selected Riker to be his first officer. Being one of fifty applicants with dry statistics and useless letters of recommendation, what caught Picard's eye about Riker was that he was willing to say "no" to his captain. Pressman interprets this as selecting someone who was disobedient, but it's here that the contrast between the two men is established: Picard wants someone who is willing to challenge him, while Pressman believes a first officer should always stand by his captain. It's also established that the official report about the incident aboard Pegasus preceding its destruction is a bit vague, containing gaps Pressman does not wish to fill.

Meanwhile, the search for Pegasus is proceeding slowly, until they find the warp core signature coming from inside a large asteroid. After tricking the Romulans into thinking there's nothing interesting inside, they resolve to come back later to investigate further. Pressman brings Riker into the ready room and chews him out for suggesting they destroy the asteroid before they find the ship. Afterwards, Picard summons Riker to his quarters. He reads from the official JAG report about the loss of Pegasus. As it turns out, there was a mutiny aboard just before they abandoned ship, and the report was deeply classified to the point that Picard needed to call in a few favors to look at it. Riker recounts what happened, saying there was an explosion in engineering and most of the crew rebelled against Captain Pressman afterwards. Nine of them ran to the escape pod, and after it launched, there was an explosion as the ship appeared to be destroyed. Furious that Riker withheld and is continuing to withhold information from him, Picard lets him go but notes that he's treading on thin ice.

The next morning, the Enterprise returns to the asteroid to find the Pegasus. Deep inside, they find the ship is still intact, appearing embedded in the rock. Pressman overrules Picard's order for an away team and beams just himself and Riker over. In engineering, Pressman finds the experiment, fully intact. Having had time to think, Riker decides to finally take a stand against the Admiral, something he was too inexperienced to do the first time around. As they argue, the asteroid becomes unstable, and they're forced to beam away. They return to the Enterprise with the piece of equipment and learn that the Romulans have "accidentally" sealed them in. The Romulans offer to beam the Enterprise crew aboard and bring them back to Romulus before returning them to the Federation, an offer that Picard considers through gritted teeth. Considering their options to escape, Riker reveals what the vital experiment was: a prototype for a cloaking device that can pass through solid matter. Pressman responds by threatening Riker's career over revealing classified information. Picard is aghast, as the Federation possessing cloaking devices was banned by a treaty with the Romulans. Nevertheless, it is their best hope of escape.

After installing the device, the Enterprise passes through the asteroid without incident. Against Pressman's objections, Picard decloaks right in front of the Romulans and informs them that there will be a full explanation later. He turns to Pressman and places him under arrest for his actions. Riker also asks to be arrested, as he partook in the crime. Picard later visits Riker in the brig, notifying him that he's reclaimed his loyalty, and releases him.

This episode infamously provided the Framing Device for the Star Trek: Enterprise Grand Finale "These are the Voyages...".