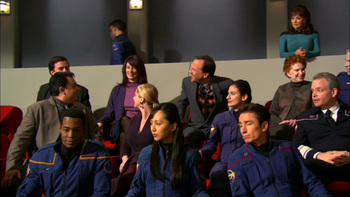 "You get the feeling we've been Demoted to Extra in our own finale?"

It's a big day for Archer and crew. The NX-01 is on her final mission, set to be decommissioned after the upcoming signing of a treaty which will lay the groundwork for The Federation. Archer is trying to figure out a decent speech to give at the upcoming ceremony... then all senior officers are called to the bridge, and Riker freezes the program.

Yes, Next Generation has hijacked the finale. Looking 11 years older and quite a few pounds heavier, Riker sits in Ten-Forward with Troi, discussing the "current" situation with Admiral Pressman.

For ill-defined reasons, Riker thinks this holo-program will help him solve his current dilemma. Troi advises him to skip ahead in the program.

Back on the NX-01, Archer gets a call from Shran. Who was assumed to have died three years ago. He needs Archer's help, as his daughter has been kidnapped. Skipping ahead by an hour in the program, T'Pol objects to aiding Shran. Until Archer reminds her that he helped get them access to the Xindi superweapon. He advises her to head down to the galley and speak to the chef. Guess who's playing cook?

Yup, Riker. Oh, apparently her and Trip broke up six years ago too. Fun tidbit. Why she spills her feelings to a chef, we'll never know.

Troi pops in as Riker looks over the Pegasus crew manifest, displaying her "amazing" empathic talents by noticing he seems upset over something. Deciding to add some people to the simulation, they watch Trip and Reed shoot the breeze. And decide to mention how Trip isn't going to come back from the rescue mission on Rigel X.

Skipping ahead to when the crew arrives on Rigel X, Shran and T'Pol converse with the kidnappers. Shrans daughter is fine, and the away team in the catwalks above distract them Shran can get away with her. In the ensuing firefight, the catwalk under Trip is shot... and he's saved from falling to his doom.

Back on the Enterprise-D, Riker meets with Troi as they get closer to the Pegasus. Blah Blah Blah, back to the NX-01.

After playing therapy chef to Reed, Hoshi, Mayweather and Phlox, we cut to Archer and Tucker toasting to "The next generation". Having the TNG crew as the main focus of the episode apparently wasn't enough. But the good times are soon interrupted, as the NX-01 comes under attack.

After boarding the ship, Trip charges off to fight. And despite Archer being out of harms way, security heading there and being safely hidden from fire, Trip decides to pull the dumbest Heroic Sacrifice in Star Trek history, blowing himself up to "protect" the ship.

Skipping ahead, we finally arrive at the day of the ceremony. And the famous, historically dynamic speech Archer has prepared for... is never heard, as Riker has finally gotten over his crisis of faith and ends the program.

And Star Trek closes out on television for twelve years with Kirk, Picard and Archer each quoting the "These are the voyages..." speeches from their respective shows.