Recap / Star Trek: The Next Generation S7E8 "Force of Nature" 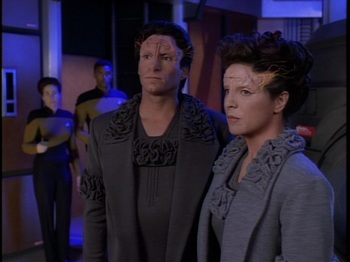 Hi, we're the aliens of the week here to deliver the environmental message of the week.

The Enterprise is flying through the Hekaras Corridor searching for a missing medical transport when she's disabled by a verteron mine disguised as a signal buoy. She's then boarded by two Hekaran scientists who claim that warp drive damages subspace in that region of space, risking the formation of a subspace rift. The crew is skeptical until one of the scientists creates a warp core breach on her ship, destroying it (with her on it) and creating the rift.

The Enterprise must find a way to rescue the imperiled transport without making a bad situation even worse.