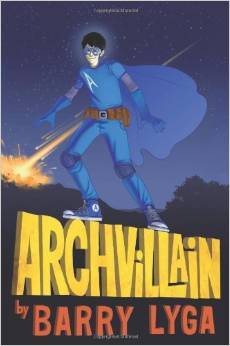 Archvilain and its two sequels, Mad Mask and Yesterday Again are middle-school superhero stories with a twist: they focus on the apparent villain of the story.

Local prankster Kyle Camden gains superpowers and super-intelligence in a strange blast of plasma radiation. At the same time, "Mighty Mike" Mathews, a mysterious boy with superpowers, arrives in town, and immediately becomes the local superhero and celebrity. But only Kyle knows the truth about him: Mike is an alien, who beamed down from space in the same plasma blast that gave Kyle his powers. Even worse, Mike has not only stolen the spotlight, he's also stolen Kyle's best friend Maira. With the help of his trusty Artificial Intelligence Erasmus, Kyle vows to expose Mike's secret and/or embarrass him publicly, and force him to leave Earth. Unfortunately, it turns out that attacking the local superhero with a laser gun isn't a good way to win public trust, and now everyone thinks Kyle's secret identity, the Azure Avenger/Blue Freak, is a supervillain...

Much of the story focuses on the possible Alternative Character Interpretation of Kyle and Mike: is Kyle the Villain Protagonist, a misguided anti-hero, or is he really the hero? And is Mike really the perfect boyscout classic hero he appears to be?