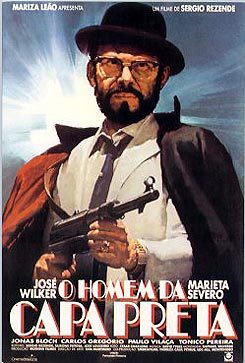 O Homem da Capa Preta, or better known in English as The Man in the Black Cape is a Brazilian movie of 1986, written and directed by famous Brazilian Director Sérgio Rezende. Its a semi-biographical account of real-life politician Tenório Cavalcanti, a right-wing populist turned left-wing from Duque de Caxias, a municipality of the Rio de Janeiro state.