Characters / The Legend of Zelda: Ganon/Ganondorf 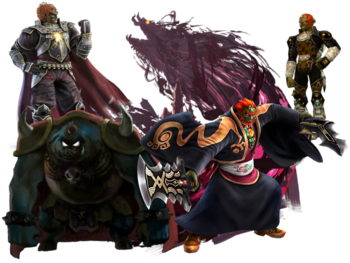 SPOILERS ON THIS PAGE WILL BE UNMARKED!

The main villain(s) of the series, known as the Prince of Darkness, the King of Evil, and the Demon King, among other similar titles. In Ocarina of Time, the chronological first appearance (in-universe) of Ganondorf Dragmire, he was the King of the Gerudo thieves who coveted the riches of Hyrule, as well as being ambitious and power-hungry in general, and only the Triforce that contains the power of the gods could satisfy him. He eventually got the power he craved, which transformed him into the demonic beast Ganon. Within the series, Ganondorf is used to refer to his human incarnation, and Ganon to his bestial incarnation. He is sometimes able to shift between these two forms at will, in which cases he appears as Ganondorf normally and invokes his Ganon form as a One-Winged Angel transformation, but on other occasions he's permanently stuck in his Ganon form as a result of being corrupted by power.

Ganondorf isn't always the Big Bad of a Zelda game, but is the most prolific and recurring one, and is generally accepted as the signature villain of the series and the Arch-Enemy of Link and Zelda. He is associated with the Triforce of Power, granting him great physical and magical strength. In some titles, he may even have the complete Triforce, not just the Triforce of Power. Otherwise, the details of his backstory, plans, and even personality varies, often because the events of previous games are Shrouded in Myth, and he's been killed and reincarnated in a new form several times. However, one thing that never changes is his goal; to use the power of the Triforce to claim dominion over Hyrule.

The origins of Ganondorf's existence are given in The Legend of Zelda: Skyward Sword, the earliest game in the franchise's chronology. Demise, the God of Evil who sought to claim the Triforce in times before the founding of Hyrule, was slain by an early incarnation of Link, but with his dying breath he placed a curse on Link and Zelda, declaring that "an incarnation of [Demise's] hatred" will plague them and their bloodlines. Ganondorf's existence is the result of this curse, and it is the reason how and why he keeps coming back no matter how often or how thoroughly he is defeated — thanks to Demise's curse, the Hero and the Princess are destined to keep crossing paths with the King of Evil.