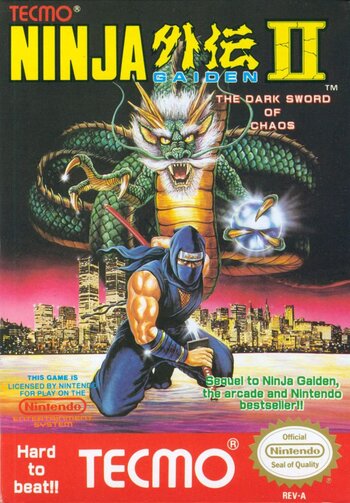 When they said Hard to Beat!! they weren't kidding.
Ninja Gaiden II: The Dark Sword of Chaos, known in Japan as Ninja Ryūkenden II: Ankoku no Jashin Ken (忍者龍剣伝II 暗黒の邪神剣) note literally, Legend of the Ninja Dragon Sword II: The Demonic Sword of Darkness and in Europe as Shadow Warriors II: The Dark Sword of Chaos, is a side-scrolling Platform Game developed and published by Creator/Tecmo for the Nintendo Entertainment System. The second of the NES Ninja Gaiden trilogy, was released in North America and Japan in 1990, and in Europe in 1992.
Advertisement:

A year has passed since the events of the first game. Ashtar, who was actually the one behind Jacquio, has learned of his minions' defeat, and plans an Evil Scheme to open up the Gates of Darkness and Take Over the World. This sets off a chain of events where Ryu Hayabusa must once again be called upon to stop the forces of Darkness and save the world.

One of the most infamously difficult games for the NES, Ninja Gaiden II basically codified Nintendo Hard along with Castlevania. Its unforgiving nature is offset by its gorgeous graphics which hold up even today, truly innovative use of cut scenes — similar to its predecessor — and that bangin soundtrack.