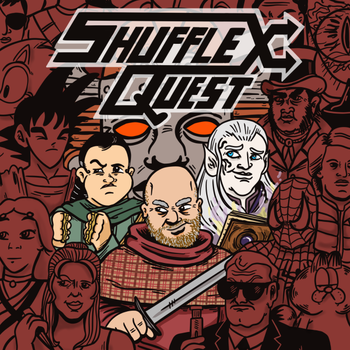 Just guess where they're going next.
Advertisement:

Shuffle Quest is an Actual Play RPG podcast featuring Tom Harrison (your favorite GM, the best GM) as the giant stone head Olmec, who sends his crew of Dungeons & Dragons characters into the various realms of pop culture and fiction. The cast consists of Joe Anderson (Ruddy Dayton), Gwynn Fulcher (Omie Heck), and Codex Melcher (Terok Nor). Olmec abducted Ruddy, Omie, and Terok from their lives in Faerun and sent them on a quest to save the multiverse. Allie Reid (Phia) joined the main cast in August 2018 with her own mini-arc establishing her backstory before joining the crew in "Wolverine is Italian."

The podcast began in July 2017 and contains the following primary arcs: