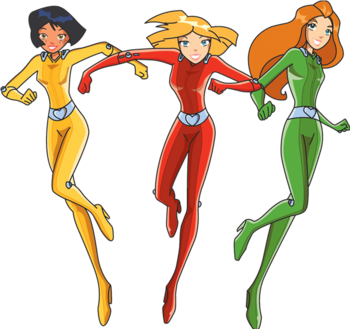 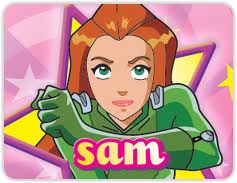 Samantha Simpson (more commonly called "Sam") has long red hair, emerald green eyes and a green catsuit. She's the most intelligent and practical girl in the group. She pursues a Journalism major at University. 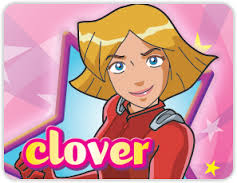 Clover Ewing has medium blonde hair, blue eyes and a red catsuit. Probably the show's most stereotypical character, Clover is a shopping addicted, boy crazy, teenage "fashionista". She pursues a Fashion Design-major when she and her friends start college. 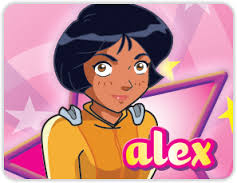 Alexandra Vasquez (more commonly called "Alex") has short black hair, tan skin, light brown eyes and her spy catsuit is yellow. Alex is the most naive and innocent of the group, and she's interested in sports and athletics. She pursues a Veterinarian major in University. 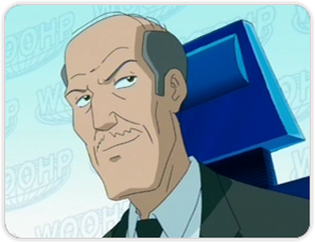 The founder and administrator of W.O.O.H.P., the World Organization Of Human Protection, Jerry is responsible for briefing the girls on their missions. He's generally very serious and professional but he does have a sense of humour, even if it is sometimes a slightly nasty one. 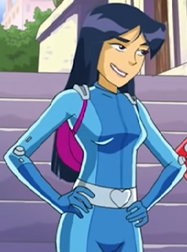 Introduced in Seasons 2–3 as the newest recruit to the team. She was called upon everytime Alex was unavailable for a mission.

Debuted in the Season 3 finale. A recurring Super-Spy who helps the girls train to be better.

Debuted in Season 5. A seemingly normal Mali-U student who Clover has fallen head over heels in love with, but was really a rogue spy trying to take her out. This turns out to false, as his employer was Geraldine Husk, who tricked Blaine into thinking Clover was an evil spy.

G.L.A.D.I.S. (Gadget Lending And Distribution Interactive System) was introduced in the episode "Physics 101 Much?" of Season 3, as a Gadget lending device. 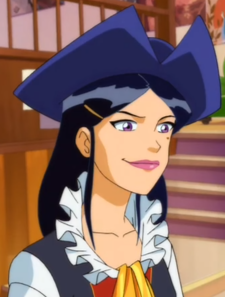 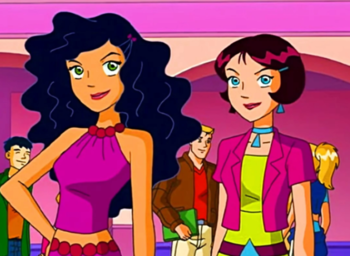 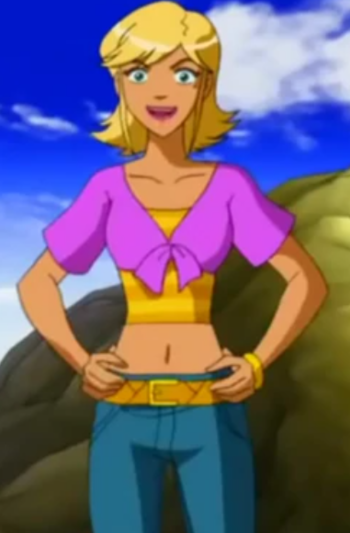 Mandy's cousin (who, if her accent is anything to go by, is originally from the South) who ends up being her roommate at Malibu University during the show's fifth season. Aside from her accent, hair color and skin tone, Mindy's pretty much identical to Mandy, to the point of where Sam once referred to them as the "Terror Twins." Another big difference between Mandy and Mindy is that Mindy's typically much calmer and more collected than Mandy, who's typically very loud and aggressive.
Trent
Voiced by: Scott Beaudin
Professor Plunkett
A professor at Malibu University who appears in Season 6—he's the teacher for the fashion class that Clover signs herself, Sam and Alex up at the start of Season 6 and is possibly in charge of Mali-U's fashion program.
Ingrid Yardstick 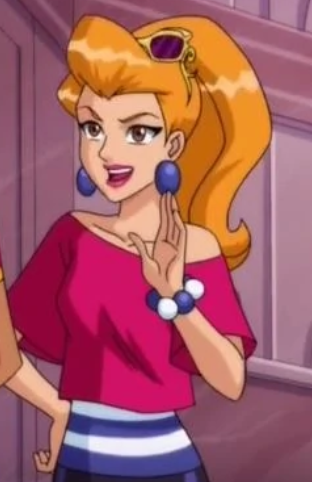 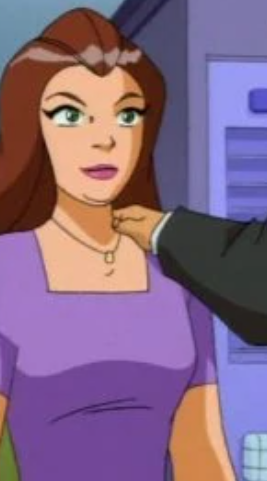 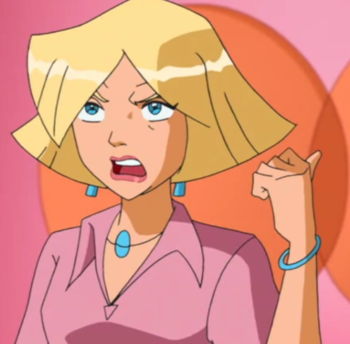 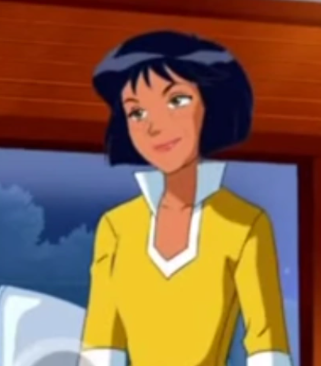 Alex's mother.
Phoebe Luxe
Mandy's mother.
Mrs. Lewis
Jerry's elderly mother. A helicopter parent who's eventually revealed to have been a spy during her youth. Despite her advanced age, she is just as strong as her son and the spies.
Mr. Vasquez
Alex's dad and Carmen's husband.
Mr. Simpson
Sam's dad and Gabby's husband.
Mr. Ewing
Clover's (unseen) father and Stella's husband.
Norman "Normie" Ewing
Clover's kid cousin and Stella's nephew who appears "Zooney World" and is seen again in the Season 6 episode "Danger TV". 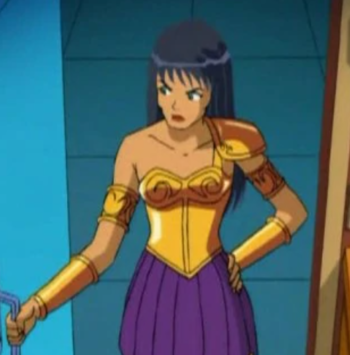 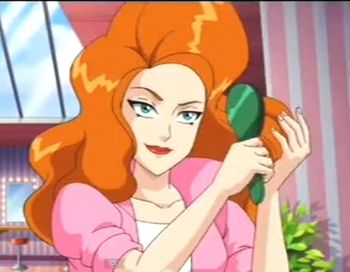 One of Jerry's old girlfriends and a former beauty queen who steals an experimental serum in order to regain her youth and glory in the pageant scene.
Boy Candy
A boy band from the 1980s and Alex's favorite boy band. Their lead singer, T-Bone hatched a plan to bring themselves back into the spotlight by using a machine to swap faces with another boyband, Teencicle and play at the unity concert in Russia.
Candy Sweet 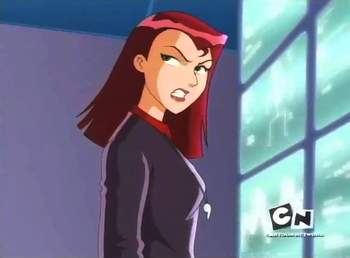 Her birth name being "Margaret Nussbaum," she's a villainous cheerleading coach who is determined to destroy the world of cheerleading out of revenge for being rejected by by the Honeybees-cheerleading squad when she was in high school (Jerry reveals to the spies that Coach Sweet went to the same high school as the Honeybees, but had graduated ten years earlier). She's also an engineer in robotics, which is how she was able to create the Black Widow cheerleader war robots.
Captain Hayes
A psychotic plane/submarine/blimp captain with a severe case of Celebrity Worship Syndrome. A very, very, very severe case.
Cosmo Stratus 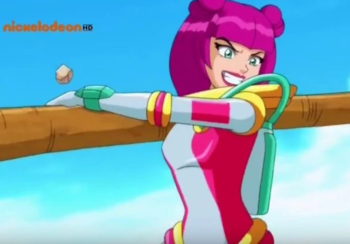 A crazy woman who was kicked out of the space program, for failing to pass the psychological testing 15 times.She invented a machine to nullify the Earth's gravitational pull in order to "bring space to her" but was thwarted by the girls.

Diminutive Smalls
A very, very SMALL mad scientist villain who tried to tried to steal the world monuments by shrinking them down to his size but he was thwarted by the spies. He was once a former W.O.O.H.P. agent who tried to make people stronger by shrinking them, only for it to backfire on him and his siblings.
Felicity Fences 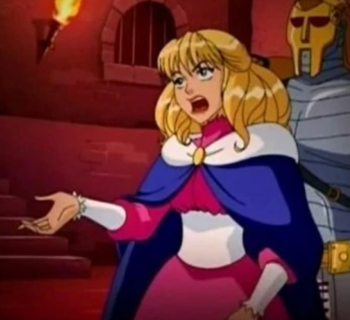 A very spoiled heiress who kidnaps the world's hunkiest men to add as her collection and then force them to fight with her robot gladiators for her own amusement.
Felicia Mane 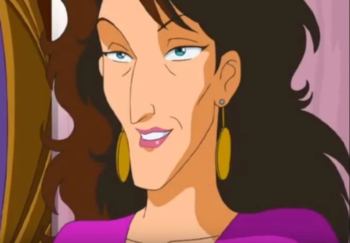 An owner of a high-end wig-making company. It's revealed that the secret of her high-quality wigs is that they come from women that have been kidnapped and have their hair soaked in a special growth formula that also drains their life in the process.
Dr. Gelee
A mad scientist who is obsessed with chess and determined to freeze the entire world over. Has a particular grudge against Clover.
Dr. Gray
A former psychiatrist who developed a device to swap people's personalities.
The Granny
A seemingly sweet old lady who is actually a master criminal who is always trying to rob banks with the help of her partners "Bubby" and "Papa".
Geraldine Husk
A former W.O.O.H.P. applicant who was rejected for not being "goody-goody enough to make the cut". In retaliation, she formed S.P.I. as a way to put W.O.O.H.P. out of business. It turns out S.P.I. orchestrated the crimes they stopped so they could get the glory and provide a distraction so that Geraldine can rob the national banks. After the girls revealed her and S.P.I. to be a fraud, she's devoted to defeating them.
The Knight Villain
An unnamed knight theme villain who tried to use a time machine to overthrow a medieval king and take over his kingdom, which would have lead to a chain reactions which would make him ruler of the world.
Jazz Hands 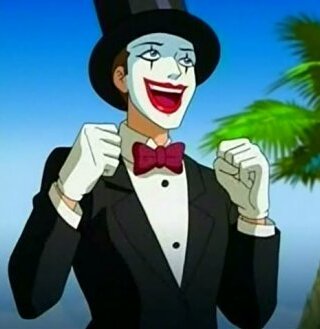 A mime themed villain who is determined to make mimes stay in the spotlight, with him as the leader of his "mime empire".
John Smith
Voiced by: Mark Hamill
A principal who is actually more than 800 years old, having discovered three Sumatran gems that can drain the life force out of people and give him eternal youth.
Kyle Katz 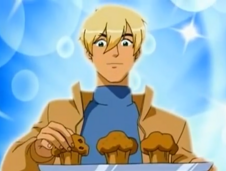 A very handsome and charismatic jewel thief who had eluded W.O.O.H.P. for years and who only commits heists whenever the planets are aligned, which causes complete darkness. All three of the spies are taken with him because of his dashing good looks.
Max Exterminus
A prize-winning exterminator who believed his job was a waste of time since he couldn't kill all the bugs in his neighborhood, let alone all the bugs in the world. So he decided, if he couldn't beat them, he would join them...or in his case, led them as king of the insects. He did this by turning himself into a half human-half cockroach mutant and attempted to rid the world of all life forms except bugs.
O.P. Parents
A group of parents of a seemingly perfect community that is secretly brainwashing their teenagers and were eventually stopped by the spies.
Salty Schooner
A pirate-themed villain who tried to steal the WOOHP-Tanic and force Clover to be his "pirate queen".
Sebastian Saga 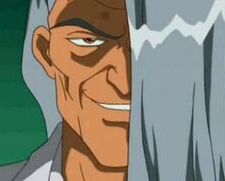 A former rock guitarist who lost his left arm in a freak pyrotechnics accident, resulting in him replacing it with a clawed prosthetic. Since then, he wanted revenge on the music industry for killing his career.
Wera Vann

A former wedding dress designer who tried to ruin high profile weddings with her weaponized dresses, only to be defeated by the spies.
Dr. Inga Bittersweet 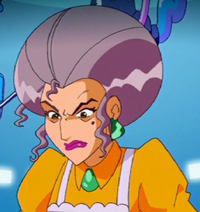 A Swiss cookie maker who was part of the Happy Girls (a Girl Scout-style scouting organization) as a kid, but was kicked out for eating the cookies that she was supposed to be selling. To get revenge, she created "Passion Patties," mint-flavored chocolate cookies that are extremely addictive and make people go crazy for them (as well as making them extremely overweight in a very short time).
Toad, Pig, Sloth, and Cow
Bittersweet's henchwomen.
Seth Toyman
A toy maker who makes toys that come to life with military technology.
Shirley
A furious yoga teacher who tries to get revenge for being driven bankrupt by a rival studio.
Simon Tucker 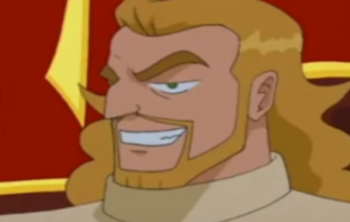 An Australian/Irish man who hates shopping and malls, as he considers it "commercialist".
Nadia 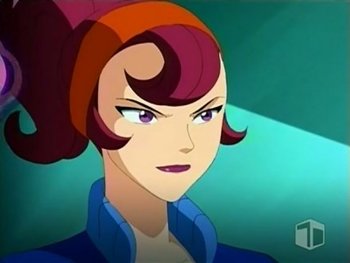 She is the coach of the Romanian women's gymnastics team, but was cheating to win by giving monkey DNA to her athletes to make them better than everyone else.
Maggie Trendset

A Brazilian woman who loves plants and jungles, but hates modern technology. Her aim is to restore the wild to the world, by force.
Ice Solina 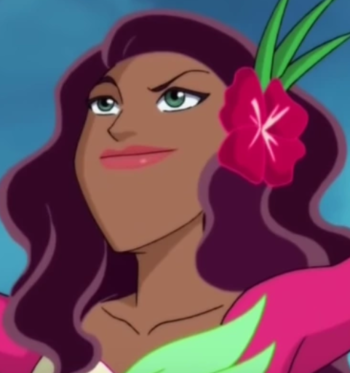 An African-Hawaiian figure skater terrorist, Solina wants to freeze the world due to being too lazy to go somewhere cold to skate. 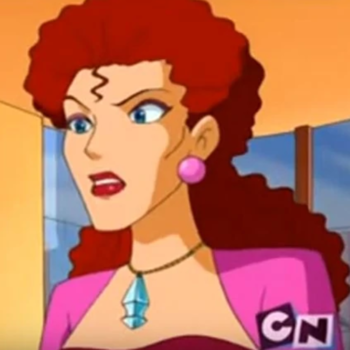 An Australian woman who was once one of the top supermodels in the world—after getting attacked by a lion during a circus-themed modeling shoot, Tuesday got a robotic leg and gave up her job as a model. She eventually became the head of her own modeling agency called "Picture Perfect," which is headquartered in Australia.

Eventually, she created a machine that makes "picture perfect" models by switching peoples' "perfect" body parts to dominate the modeling industry and get revenge.

An accomplished botanist, Viola experienced a string of unsuccessful romantic relationships, all of which ended in her being dumped. The breakups all soured her on romance, and men in general. In misguided revenge, she genetically engineered a hybrid of venomous flowers that could leave it’s victims in a zombie-like state, planning to use them to “zombi-fy” the planet’s entire male population.

Virtual Demon
A mysterious entity that possessed Britney as the result of an accident during her virtual simulation training. It took the form of three incarcerated villains who were out for revenge on the spies.