Webcomic / Down the Hatch 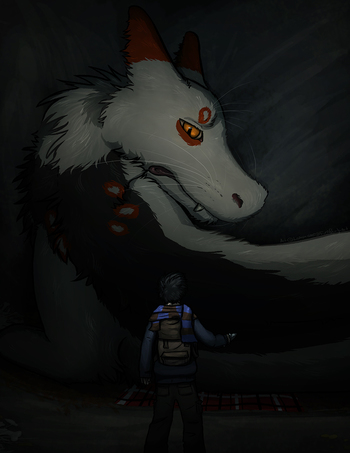 A man-eating monster and his dinner.note In the back, Mordecai the Imperial Fire-Demon, in the front, his would-be killer Noah.

is a fantasy/horror webcomic by an artist called Lemondeer, set up in a fantasy universe where humans are a distinct minority, living among a standard fantasy tribe (Goblins) and anthropomorphic animals. It would be an almost idyllic world if not for the fact that giant quadrupedal Youkai stalk the forests and mountains, ready to devour all who trespass on their territories like kaiju-sized tigers. Some don't wait for their prey to come to them, either. Raids on human villages are depressingly common.

Did we mention that these "Imperial Fire-Demons" are also pyrokinetic?

The story concerns one older teenager Noah, sent by goblins with a pathetically undersized dagger to kill a troublesome "animal." When he reaches the lair, he doesn't find a cougar or a bear - he finds an Imperial Fire-Demon, apparently asleep. Still not understanding what he was facing, he raised his dagger, and the very much awake Imperial Fire-Demon rumbled:

After a Curb-Stomp Battle, a narrow escape from being eaten and a desperate run into the forest, a wounded Noah finds he cannot outpace the angry beast. His prey cornered, the fire-demon picks Noah up...

...and summarily swallows him.

With stomach acids rising and what little air he had going stale, Noah makes a last frantic attempt to bargain for his life... and then the completely unexpected happens.

What started out as a simple "vore" comic, exploring the interactions between sapient predators and their human prey, mutated and became an epic Low Fantasy. The fire-demon and Noah end up the strangest of quest partners, Mordecai seeking the secret of immortality, Noah seeking his missing sister. Can they possibly succeed? Or will Noah once again end up down the hatch... permanently?